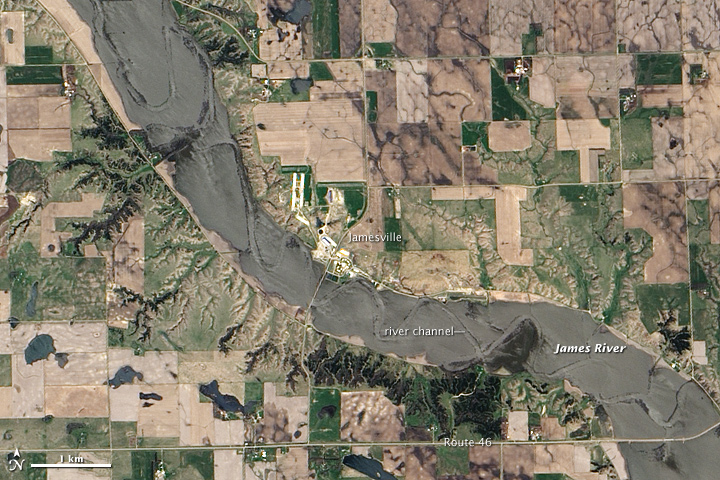 A tributary of the Missouri River, the James River flows generally southward through the Dakotas. In early May 2011, the James, like other rivers in the U.S. Midwest, was flooded. The Advanced Land Imager (ALI) on NASA’s Earth Observing-1 (EO-1) satellite captured this natural-color image of the river passing through Jamesville, South Dakota, on May 1, 2011.

River water in this image appears charcoal gray with an iridescent sheen. Although the river has not spilled over its banks, it fills the river valley completely. The river’s regular channel is the narrow, serpentine strip that meanders through the river valley. On either side of the river, agricultural fields create a patchwork of green and beige.

Jamesville lies between Scotland and Yankton, two other South Dakota towns near the river. The Advanced Hydrological Prediction Service (AHPS) of the U.S. National Weather Service monitors water levels in the James River at both sites. Three days after ALI acquired this image, the AHPS reported that the James River remained at major flood stage in both Scotland and Yankton.

Acquired June 5, 2011, and May 19, 2005, these false-color images compare conditions around Lewis and Clark Lake in South Dakota.