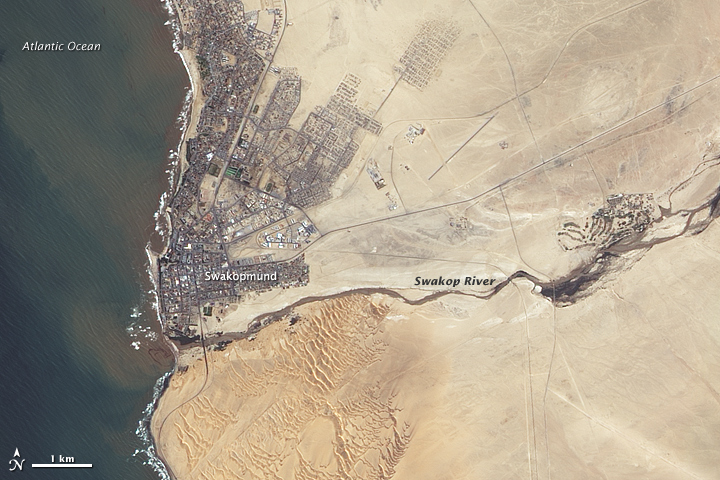 The Namib Desert stretches along the western coast of southern Africa, a combination of bare rocks and sand dunes. In this perpetually arid environment, rivers flow toward the coast, but they are impermanent rivers that don’t necessarily reach the ocean year after year. One of these ephemeral rivers is Swakop, which drains into the Atlantic Ocean just south of Swakopmund. On average, the Swakop River reaches the Atlantic every five years.

South of the Swakop River flows another impermanent river, the Kuiseb. The Kuiseb has historically formed a sharp dividing line between the different terrains of the Namib Desert, preventing sand dunes in the southern Namib from marching northward over rocky ground. In dry years, however, with no water to wash sand out of the Kuiseb channel, dunes have crept northward past the river valley. In fact, a thin line of dunes stretches along the Namibian coast, all the way to the Swakop River, roughly 50 kilometers (30 miles) north of the Kuiseb. The sand dunes bordering the Swakop River’s southern banks are part of this long stretch of sand dunes.

In April 2011, as the Swakop River flowed all the way to the Atlantic Ocean, residents of northern Namibia coped with an unusually severe rainy season that forced thousands from their homes.