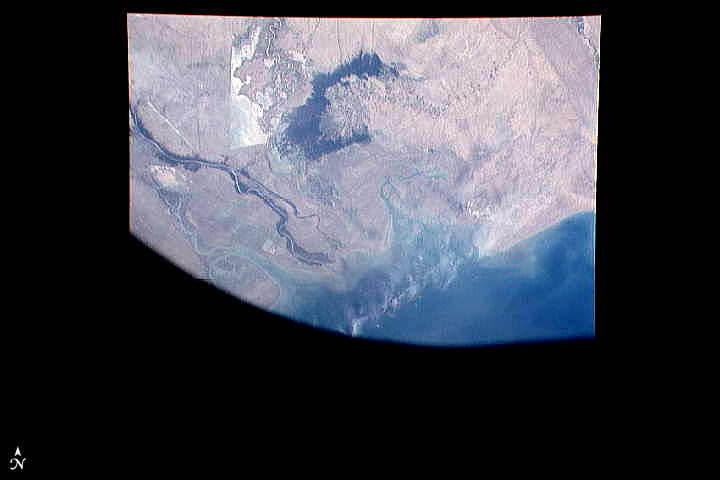 On April 12, 1961, cosmonaut Yuri Gagarin became the first human to reach Earth orbit. Launching from Baikonur Cosmodrome on Vostok-1, he flew for 108 minutes and nearly circled the planet before landing in Kazakhstan. From a porthole at his feet, he could view our blue planet as a sphere. He declared: “It is indescribably beautiful.”

On April 12, 1981, astronauts John Young and Robert Crippen rode the space shuttle Columbia into the sky, launching from Cape Canaveral in the world's first reusable space vehicle. It was the first time in history that a new spacecraft was launched on its maiden voyage with a crew aboard. Thirty years and 513 million miles later, the NASA space shuttle fleet—Discovery, Endeavour, Atlantis, together with Columbia and Challenger (both lost)—has carried 350 people into orbit on 133 flights.

In honor of this double anniversary, Earth Observatory offers this astronaut photograph of part of the region where many historians say the march of civilization began: the “Fertile Crescent” of the Middle East. Known to many as “the cradle of civilization,” the stretch of land astride the Tigris and Euphrates rivers nurtured several of the earliest known cities and empires.

Astronauts on flight STS-1 captured this view of Iran, Iraq, and Kuwait through a viewport on the space shuttle on April 13, 1981. The photo was taken with a handheld camera on the 15th orbit around Earth, during a flight that lasted 54 hours.

The space shuttle has “helped us improve communications on Earth and understand our home planet better,” said NASA Administrator Charles Bolden on April 12, 2011. “It's set scientific satellites like Magellan and Ulysses speeding on their missions into the solar system, and launched Hubble and Chandra to explore the universe. It's enabled construction of the International Space Station, our foothold for human exploration, which is leading to breakthroughs in human health and microgravity research.”

It all started fifty years ago this day. The United Nations has declared April 12 to be the International Day of Human Space Flight.

Astronaut photograph STS001-8-230 was acquired on April 2, 1981, with a Hasselblad medium format camera using an 80 mm lens, and is provided by the Image Science & Analysis Laboratory, Johnson Space Center. The image was taken by the first Shuttle Flight crew. The image in this article has been enhanced to improve contrast. Lens artifacts have been removed. Additional images taken by astronauts and cosmonauts can be viewed at the NASA/JSC Gateway to Astronaut Photography of Earth. Caption by Mike Carlowicz.