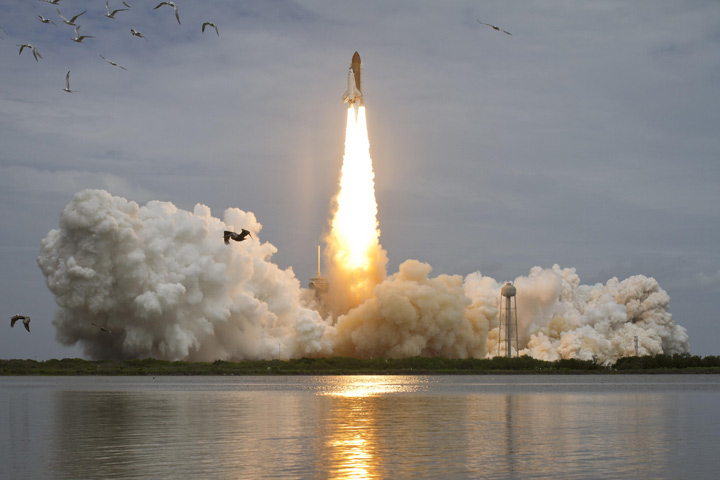 At 11:29 a.m. Eastern Daylight Time on July 8, 2011, the Space Shuttle Atlantis lit its rockets and roared into space. Four astronauts made the climb toward orbit and the International Space Station (ISS), where they will arrive on Sunday. The 135th and last flight of the U.S. space transportation system, or STS, comes 30 years after the first flight in April 1981. You can view video of final launch on NASA's YouTube channel.

When they rendezvous with the ISS, the shuttle astronauts will help set up the Raffaello logistics module, which is filled with supplies and spare parts to sustain station operations after the shuttles are retired. The crew also will conduct the robotic refueling mission, an experiment to test tools and techniques for robotic refueling of satellites in space.

The 12-day mission is the 33rd for Atlantis, which is named for an oceanographic research vessel. In fact, all of the shuttles were named for famous ships of exploration: Challenger, Endeavour, Discovery, and Columbia.

“The shuttle's always going to be a reflection of what a great nation can do when it dares to be bold and commits to follow through,” said Space Shuttle Commander Chris Ferguson shortly before liftoff. “We're not ending the journey today. We're completing a chapter of a journey that will never end.”

Over the years, Earth Observatory has featured many images, data sets, and human insights from the Space Shuttle program. In tribute to those achievements and to the unique view of Earth that the shuttle has provided, we offer a new photo feature: Every Flight is a Mission to Planet Earth.