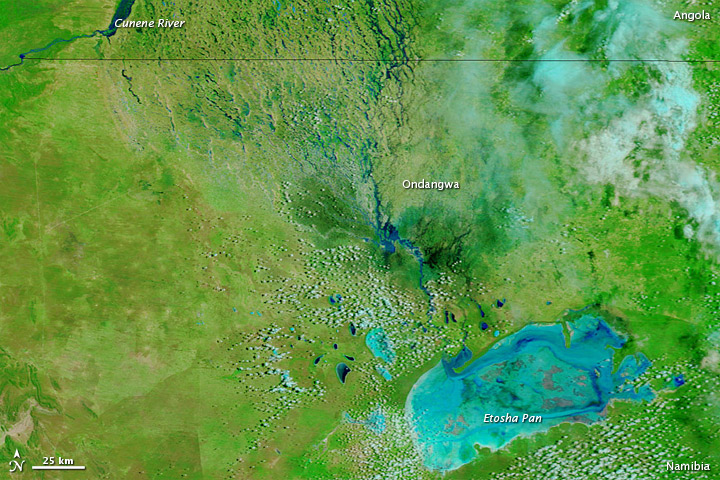 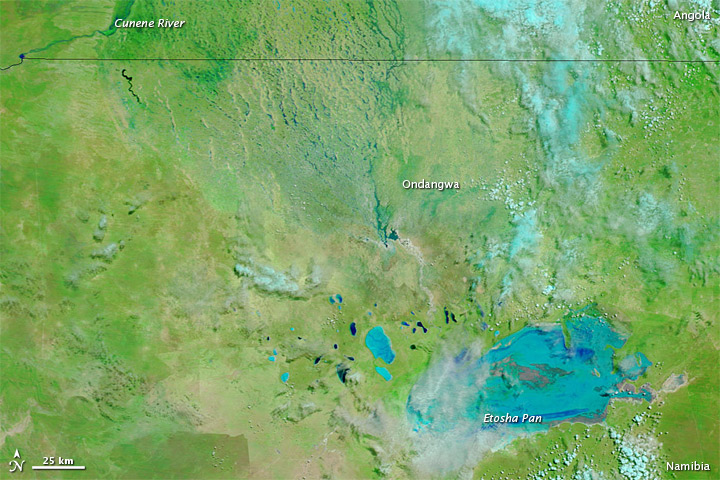 In western Africa, a vast network of impermanent rivers and lakes straddle the border between Angola and Namibia. During the region’s rainy season, which may last from November to April, water transforms the parched landscape. Rains provide much-needed water to local wildlife, particularly around Etosha Pan. In March 2011, however, the wet season proved unusually severe. The United Nations Office for the Coordination of Humanitarian Affairs (OCHA) reported flooding across much of southern Africa, especially in parts of Angola and Namibia. In northern Namibia, heavy rains forced residents to seek higher ground.

Acquired a year apart, these images show wet-season conditions in 2011 and 2010. The Moderate Resolution Imaging Spectroradiometer (MODIS) on NASA’s Terra satellite acquired the top image on March 9, 2011, and the bottom image on March 10, 2010. Both images use a combination of infrared and visible light to increase the contrast between water and land. Water ranges in color from bright blue to navy. Vegetation, even sparse vegetation, appears bright green. Clouds appear sky blue, and often cast dark shadows onto the land surface below.

Besides the generally greener conditions in 2011, the most striking difference between 2010 and 2011 appears south of the settlement of Ondangwa and north of Etosha Pan. In 2011, wide areas of standing water occur in places that had been largely dry a year earlier. Deeper water—indicated by darker shades of blue—fills the multiple channels along the Angola-Namibia border in 2011, and the Cunene (or Kunene) River also appears flooded.

Despite the March 2011 flooding, water is often scarce in this region, and over the past several million years, Etosha Pan has slowly evaporated. Some 10 million years ago, climate and topographic changes caused the Cunene River to change course and flow toward the Atlantic. Plentiful rainfall enables some tributaries of the Cunene to feed Etosha Pan, but even with this intermittent water supply, the lake can be twice as salty as seawater.

Flooding and Drought in Etosha Pan

Acquired May 13, 2011, and March 30, 2011, these false-color images show receding floods around the city of Ondjiva in southern Angola.