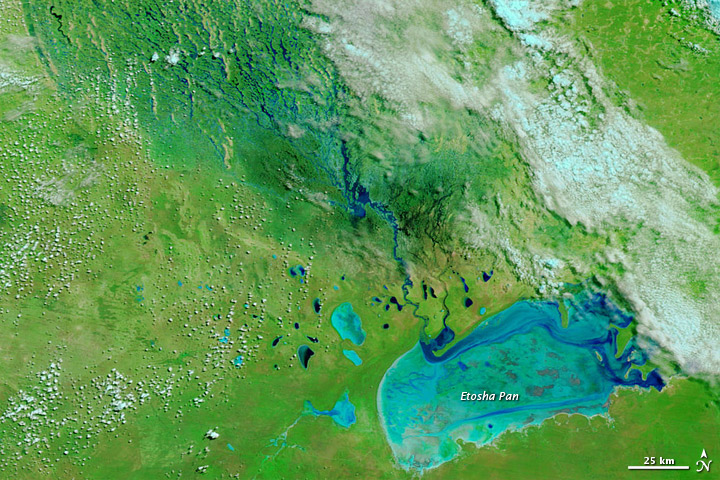 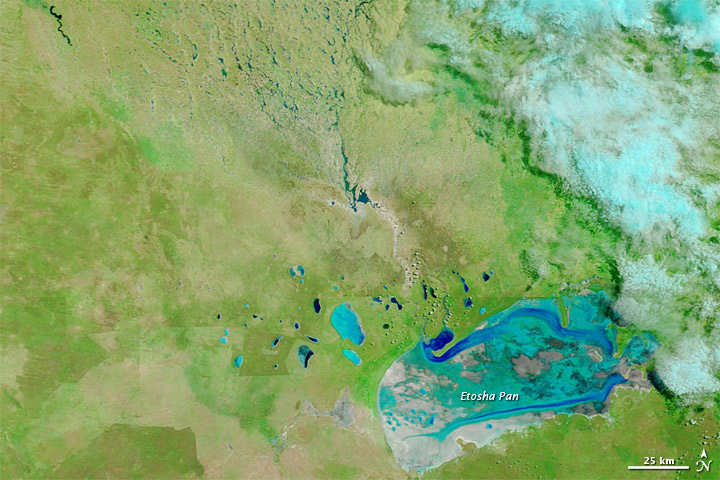 Heavy rains continued falling throughout parts of southern Africa in mid- and late March 2011. The United Nations Office for the Coordination of Humanitarian Affairs (OCHA) described flood-affected districts extending from Angola and Mozambique southward to South Africa. Across northern Namibia, nearly 5,000 people were forced to evacuate. Flood waters damaged both crops and infrastructure.

Evidence of the unusually heavy precipitation appeared in and around Etosha Pan, a large salt lake just south of the Namibia-Angola border. The Moderate Resolution Imaging Spectroradiometer (MODIS) on NASA’s Terra satellite acquired these images of Etosha Pan and the impermanent water bodies north of it on March 20, 2011 (top), and March 17, 2010 (bottom).

These images use a combination of infrared and visible light to increase the contrast between water and land. Water varies in color from electric blue to navy. Vegetation appears bright green. Bare ground appears pink-beige. Clouds appear sky blue, and often cast shadows onto the land surface below.

The image from 2011 shows a much more richly vegetated landscape, evidenced by darker shades of green. More standing water also appears on the landscape. In 2010, water channels extending toward Etosha Pan are nearly dry. A year later, they are filled with water. Etosha Pan itself holds more water in 2011, as do many of the smaller lakes in the north and west.

The widespread precipitation experienced in March 2011 is unusual for this region, even though rainy season may last from November to April. The area is generally arid, so when sufficient rains fill regional water bodies, they become life sustaining to local wildlife.

Unusually heavy precipitation affected other areas along the western coast of southern Africa. By late February 2011, the Kuiseb River, lying midway between the northern and southern borders of Namibia, received enough precipitation to reach the Atlantic Ocean for the first time since 1963.

Flooding and Drought in Etosha Pan