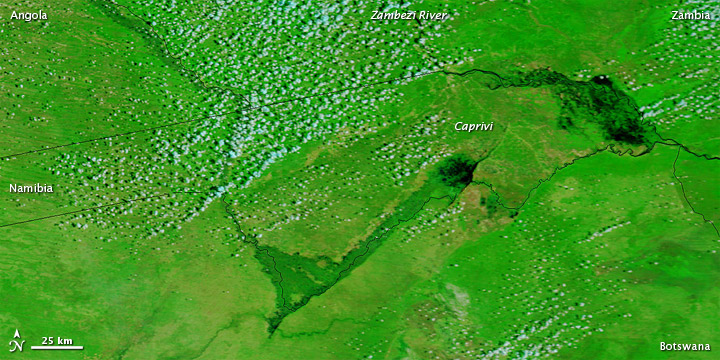 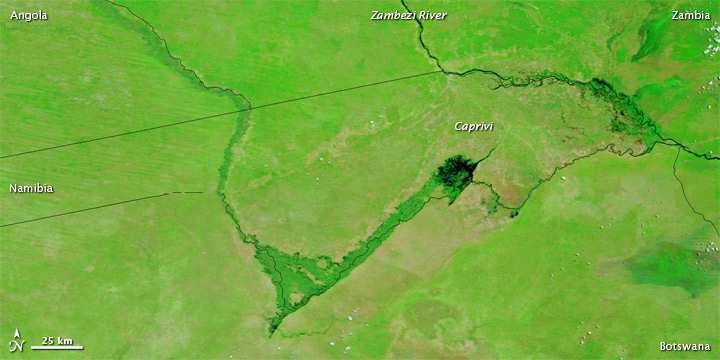 Bracing for near-record water levels on the Zambezi River for this time of year, authorities evacuated more than 1,000 residents in Namibia’s easternmost province of Caprivi in late January 2011. The flooding resulted from heavy rains upstream on the Zambezi. The Office for the Coordination of Humanitarian Affairs and the UN Food and Agriculture Organization warned of rising food insecurity in the aftermath.

These images, acquired by the Moderate Resolution Imaging Spectroradiometer (MODIS) on NASA’s Terra satellite, show Caprivi in the midst of flooding on February 9, 2011, and roughly one year earlier (February 12, 2010). The images use a combination of infrared and visible light to increase the contrast between water and land. Water is navy blue. Clouds are pale blue-green and cast dark shadows onto the land surface below. Vegetation appears in varying shades of green. Bare ground ranges in color from pink-beige to tan.

The Zambezi River flows along the border between Namibia’s Caprivi Province and Zambia. In easternmost Caprivi, the river has spilled over its banks in 2011, leaving a large area underwater.

Acquired February 12, 2010, and February 9, 2011, these false-color images show Namibia’s easternmost province of Caprivi before and after floods along the Zambezi River.

Flooding along the Zambezi River