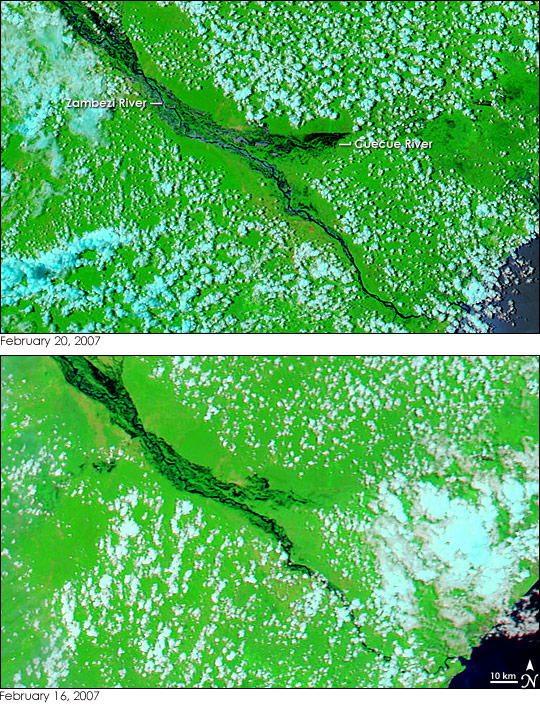 The Moderate Resolution Imaging Spectroradiometer (MODIS) on NASA’s Aqua satellite acquired these two images of the Zambezi River in central Mozambique in February 2007 just four days apart. Over the course of a weekend, floods along the lower Zambezi River in Mozambique spread to a nearby branch, the Cuecue River. According to local news reports released by the Agencia de Informacao de Mocambique, the floods along the Zambezi started to drop on February 20, though water levels on the lower Zambezi, shown here, remained high. As the top image shows, some of the water is draining into smaller offshoots along the river valley and into the Indian Ocean.

These images use both visible and infrared light to increase the contrast between water and land. In this color combination, water is black or dark blue, while bare ground is tan and plant-covered land is green. Clouds are blue and white. The Sun’s reflection off the surface of the water turns the river pale blue in the top image, and a web of flood water surrounds the dark line cut by the Zambezi River across the center of both images. South of the fresh floods on the Cuecue River, several dark spots along the Zambezi indicate additional flooding. To see daily images of the flood area in central Mozambique, please visit the MODIS Rapid Response web site.

The floods started when unusually early and heavy rain pounded southern Africa in January and February 2007. The rains triggered floods that affected nearly 170,000 people in Angola, Madagascar, Malawi, Mozambique, Zambia, and Zimbabwe, said the United Nations Office for the Coordination of Humanitarian Affairs (OCHA). In Mozambique, the United Nations and other organizations were providing food to more than 120,000 evacuees as of February 20, said OCHA.

Floods swept across southern Africa in the wake of unusually heavy rains at the end of January and into February 2007.