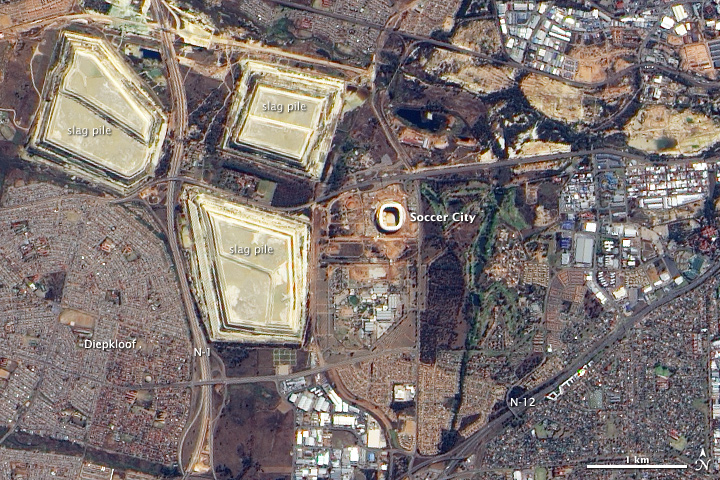 The site of the June 11 opening game for the 2010 World Cup, Soccer City sits in Johannesburg’s Soweto Township. Previously named the FNB Stadium, the facility underwent an upgrade for the 2010 World Cup games. The Advanced Land Imager (ALI) on NASA’s Earth Observing-1 (EO-1) satellite captured this natural-color image of the stadium on May 14, 2009, while upgrades were apparently still in progress. Shaped roughly like a rectangle with rounded corners, the stadium sports high walls that cast long shadows toward the southwest.

On the opposite side of the slag piles from Soccer City is Diepkloof, one of several settlements comprising Soweto. The roughly circular-shaped settlement shows a street grid typical of residential areas, with small, closely packed houses. East and northeast of Soccer Stadium are clusters of much larger buildings characteristic of an industrial park.

Although vegetation appears in this image, it is relatively scarce, and much of the ground appears in shades of beige and brown, either sparsely vegetated land, or earth upturned to prepare for construction. One exception is the green golf course immediately east of Soccer City.

Acquired May 14, 2009, this natural-color image shows Soccer City, a stadium in Soweto, and its surroundings.