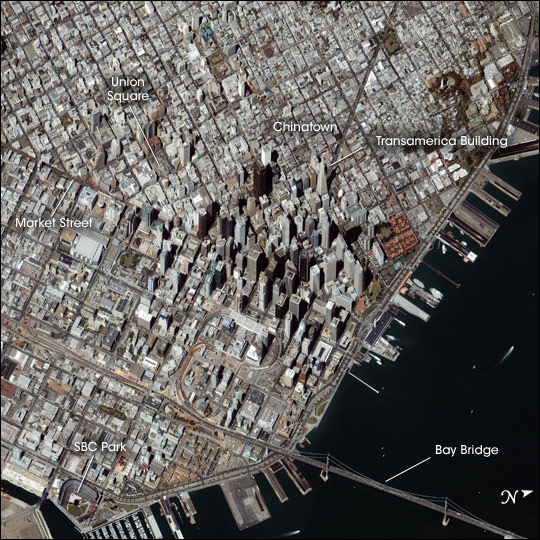 San Francisco is one of the largest cities in the United States. Roughly three quarters of a million people live within the city proper, with about seven million within the broader metropolitan area. The city predates the gold rush of 1849, but as a port city on the way to the California gold fields, San Francisco saw explosive population growth after the first discoveries were announced. By 1869, it was connected to the Eastern cities by railroad, and at that time, it was one of the ten largest cities in the United States despite being a full thousand miles or more west of “the frontier.” It remains a premier city of the United States.

It is also arguably one of the most beautiful cities in the United States, sitting right on the San Francisco Bay. The city’s climate is moderated by its closeness to the Pacific Ocean, and the relative warmth of the Pacific air that flows toward the city over the cold water currents near the coastline is responsible for the city's famous fogs. The city is bounded on the east by the rocky and forested hills of the Coast Range Mountains.

There was no such fog on August 28, 2004, when the IKONOS satellite took this unusual oblique-angle image of the city’s financial district. By aiming its sensors off nadir, IKONOS was able to capture a sense of the city’s tall skyscrapers: a unique perspective on a unique city.

Among the many emblems of San Francisco evident in this image is the Transamerican Pyramid Building, built in the late 1960s as the headquarters of the Transamerica Corporation. Designed specifically to allow light and air to reach down to the streets in ways conventional box-shaped buildings did not, its unique style and appearance made it an icon of the city and an internationally recognized landmark.

Also visible is the Chinatown District of the city, the largest such Chinatown outside Asia. Although Chinese immigrants predated the gold rush, their numbers swelled in that time, mostly due to immigrants who came to run businesses to support gold miners. Businesses like groceries and dry-goods stores often proved far more lucrative than gold mining itself.

East of Chinatown is Union Square, so named by the city’s first mayor, John Geary, after demonstrations supporting Union troops were held on the square on the eve of the Civil War. South of Union Square is Market Street, one of the major streets of the city. Market Street divides the financial district from the SOMA (south of Market) district, which hosts the Moscone Convention Center, the Yerba Buena gardens, and numerous art galleries, nightclubs, and exhibition galleries.

In the lower left corner of the image, SBC Park, home to baseball’s San Francisco Giants, is clearly visible. Its right field wall juts out onto McCovey Cove, giving this ballpark the unusual distinction of being the only park where kayakers can catch home runs hit out of the park. The Bay Bridge connects the city with Oakland, and beyond that, to Interstate 80, which runs from San Francisco to New York City through Salt Lake City, Chicago, and other large cities.

Planned at the end of the sixteenth century and built during the seventeenth, Amsterdam has inspired generations of city planners.