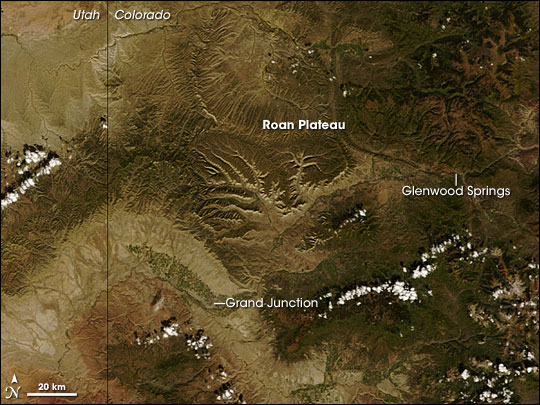 In this natural-color image, the Roan Plateau assumes shades of green, brown, and beige, and deep canyons form branching, tree-like patterns on the landscape. In this largely arid environment, irrigation enables crops to thrive, evidenced by the relative greenness of the orchards and lawns around Grand Junction, Colorado. Immediately north of Grand Junction, the land is pale beige, characteristic of an elevated desert. This expanse of dry landscape extends westward into Utah, as well as southeast of the city. East of Grand Junction, however, the terrain is mountainous and forested with conifers.

The dramatic changes in elevation throughout the Roan Plateau provide habitat to many of the area’s wild species, which, combined with the landscape, became highly prized to backpackers and wildlife enthusiasts. The area’s energy reserves, however, invited exploration and drilling. In 2000, the U.S. Bureau of Land Management began developing the Roan Plateau Resource Management Plan. Released in final form in early 2008, the plan allowed for recovery of natural gas from beneath the plateau while setting aside 21,034 acres (85 square kilometers) as Areas of Critical Environmental Concern. 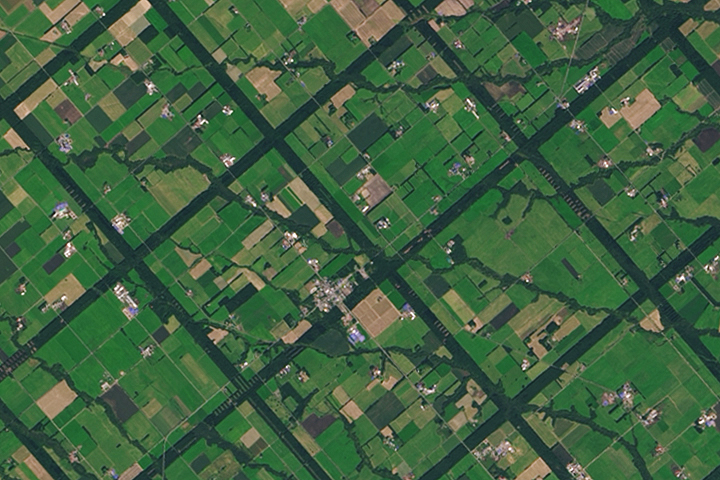 A Windbreak Grid in Hokkaido

Reservoirs, Bends, and Canyons on the Colorado Plateau

Ancient geologic features and modern creations share the spotlight in this photo of southeastern Utah and northern Arizona taken from the ISS.

In a unique ecosystem with several rare and endangered species, grazing and fires are altering the landscape.