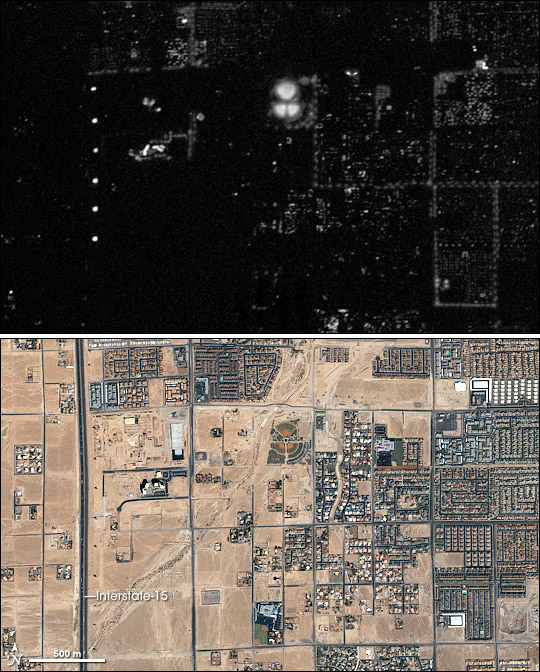 Few, if any, manmade features on the Earth’s surface provide a more conclusive sign of humanity’s presence here than nighttime lights. Night lights have been used for studying everything from sociological patterns such as population density and gross domestic product to the ecological and physiological impacts of nocturnal lighting on other species and human health. Nighttime lights are such a good indicator of urban development and human settlement patterns, some scientists have investigated what kind of capabilities a satellite sensor ought to have if we wanted it to be able to make scientifically useful observations of night lights from space.

This image of nighttime lights in the southwestern outskirts of Las Vegas, Nevada, was one of several images that an international team of scientists analyzed in 2007 to figure out what spatial resolution (level of detail) a sensor would need to be capable of to distinguish significant urban patterns, such as major roads, commercial centers, dimly lit residential neighborhoods, and undeveloped tracts without artificial lights. The photo was captured on September 27, 2004, with a Cirrus DCS digital camera mounted on NASA’s ER-2 research airplane flying at an altitude of 13.7 kilometers.

For comparison, a high-resolution image from the commercial IKONOS satellite taken a week before appears below. The comparison shows how many urban features are detectable simply through lighting patterns. A line of billboards lit up along Interstate 15 competes with a trio of baseball fields (image center) for the brightest feature in the scene. Regularly spaced lights outline the paths of roads. Scattershot dim lighting stretches out over residential areas at image right.

The spatial resolution (level of detail) of the high-resolution nighttime image was 1.5 meters per pixel. The scientists took images such as this one and degraded them to various degrees to simulate what images from sensors with different capabilities would look like. They concluded that a ‘Nightsat’ mission would need a sensor with a resolution between 50–100 meters per pixel to capture major urban patterns.

This image of nighttime lights in the southwestern outskirts of Las Vegas, Nevada, was one of several images that an international team of scientists analyzed in 2007.

Holiday Lights in the US Southeast

Satellite sensors detect increases in December holiday lighting in the United States, particularly in the suburbs and rural areas.

Holiday Lights of the American Southwest

Satellite sensors detect increases in December holiday lighting in the United States, particularly in the suburbs and rural areas.