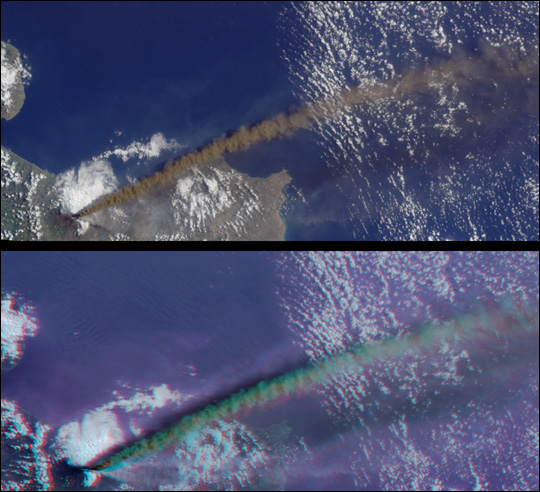 The image panels are a natural-color view from MISR’s vertical-viewing (nadir) camera (top), and a 3-D stereo anaglyph (bottom). In the anaglyph, data from the 70-degree and 60-degree forward-looking cameras are displayed as red and green-blue, respectively. (For the 60-degree camera, 275-m red band data were used to spatially “sharpen” the green and blue 1.1-km resolution imagery). With the aid of red-blue glasses, the three-dimensional nature of the ash plume and the relative heights of plume and clouds can be discerned. Glasses should be worn with the red filter placed over your left eye. Information on ordering glasses can be found at http://photojournal.jpl.nasa.gov/Help/VendorList.html#Glasses .

Also provided is a "fly-over" animation, which progresses according to the sequence in which the MISR cameras observed this scene. Both the "fly-over" and the stereo anaglyph allow the structure of both the main, dark plume and several lighter-colored plumes to be observed. The animation uses all nine MISR cameras. As the Terra satellite passes overhead, the 70-degree foward-viewing camera views a scene first, followed by the 60, 46 and 26-degree forward-viewing cameras, the nadir camera, and the four backward-viewing cameras. It takes approximately seven minutes for all nine cameras to view an area.

The Multi-angle Imaging SpectroRadiometer observes the daylit Earth continuously from pole to pole, and every 9 days views the entire globe between 82 degrees north and 82 degrees south latitude. These images were generated from a portion of the data acquired during Terra orbit 15233 and have been oriented with north to the left. The still image panels cover an area of about 297 kilometers x 133 kilometers, and utilize data from blocks 60 to 62 within World Reference System-2 path 187.

MISR was built and is managed by NASA’s Jet Propulsion Laboratory, Pasadena, CA, for NASA’s Office of Earth Science, Washington, DC. The Terra satellite is managed by NASA’s Goddard Space Flight Center, Greenbelt, MD. JPL is a division of the California Institute of Technology.

Sicily's Mt. Etna began erupting on Oct. 27, and two months later is still emitting a plume of ash and smoke.