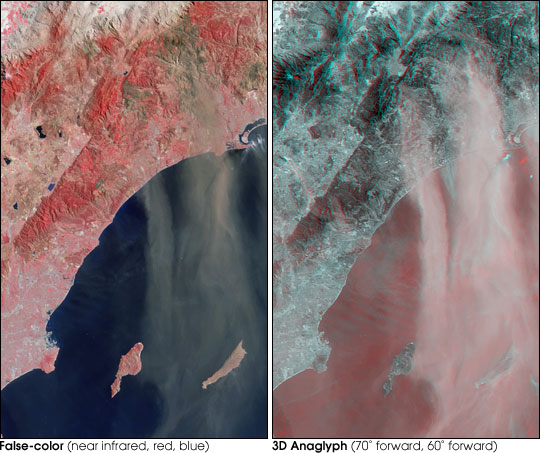 The Santa Ana winds that typically blow through Southern California during late fall and winter swept large amounts of dust and ash across the skies of San Diego and over the Pacific Ocean on November 27, 2003. The intense brush fires that had swept through the foothills of this region in October left soils exposed and vulnerable to such strong winds.

In this image pair from the Multi-angle Imaging SpectroRadiometer (MISR), a false-color nadir image (left) highlights the burnt areas, while a 3-D stereo anaglyph image (right) accentuates the dust and indicates the relative height above the surface of the dust and ash blown aloft from the hills that were burnt. The two images cover the same area and have been oriented with north toward the left in order to facilitate stereo viewing. Burnt areas appear in brown hues and highly vegetated areas appear red in the left-hand view, which was constructed with near-infrared, green and blue band data from MISR’s vertical-viewing (nadir) camera. The accentuation of the dust and ash plumes in the anaglyph is due to the use of imagery from two of MISR’s oblique-viewing cameras. Here, red band data from MISR’s 70° forward-viewing and 60° forward-viewing cameras are displayed as red and green/blue, respectively. The anaglyph makes it possible to see height variations of the surface terrain, dust and ash plumes, and a few high clouds, but height variations can only be observed in 3-D with the aid of red/blue glasses. Information on ordering glasses can be found at http://photojournal.jpl.nasa.gov/Help/VendorList.html#Glasses.

The Multi-angle Imaging SpectroRadiometer observes the daylit Earth continuously and every 9 days views the entire globe between 82° north and 82° south latitude. The MISR Browse Image Viewer provides access to low-resolution true-color versions of these images. These data products were generated from a portion of the imagery acquired during Terra orbit 20976. The panels cover an area of about 144 kilometers x 237 kilometers, and use data from blocks 64 to 65 within World Reference System-2 path 40.

Elevated Dust over the Middle East