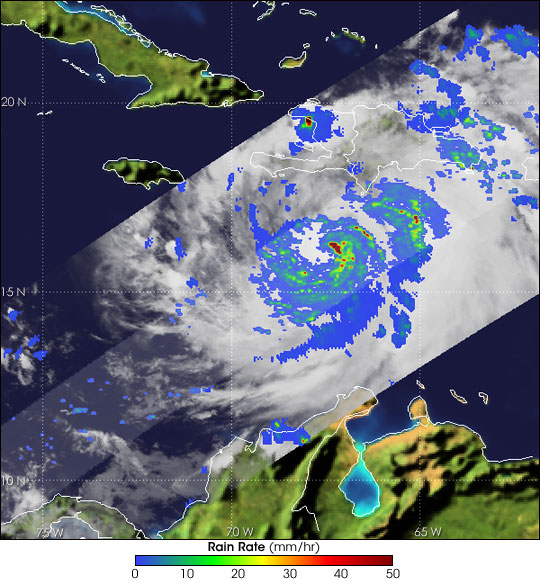 On the heals of the devastating 2004 hurricane season, the 2005 season is so far off to a fast and furious start with the emergence of major hurricane early in the season. By July 8, 2005, Hurricane Dennis was an intense Category 4 hurricane on the Saffir-Simpson scale and was passing directly over Cuba, also hit by Hurricane Charley in 2004. The storm is expected to emerge into the Gulf of Mexico as a major hurricane, posing a powerful threat to the Gulf Coast of the United States.

This image shows Dennis as it was strengthening from a tropical storm into a hurricane on July 6, 2005. The Tropical Rainfall Measuring Mission (TRMM) satellite captured this image at 5:31 p.m. EDT (21:31 UTC). The image reveals rain rates associated with Dennis, with heavy rains shown in red. The rain field surrounding the storm was becoming symmetrical, wrapping around the center of circulation.

TRMM also reveals an area of intense rainfall (dark red area) very near the center of Dennis that is likely associated with a convective burst, an intense section of the storm that may be a precursor to intensification. Hurricanes act as large heat engines. The fuel for these engines comes from the condensation of water vapor in the atmosphere. As water vapor condenses into the tiny cloud droplets that lead to precipitation (shown here as rainfall), heat is released. This heat, known as latent heat, is what drives the circulation of the storm. In general, the more heat that is being released, the more intense the storm will be. This heating is most effective in driving the storm if it occurs near the center of the storm as is the case shown here with Dennis. Less than an hour after this image was taken, Dennis was re-classified as a hurricane with maximum sustained winds measured at 80 miles per hour by a hurricane hunter aircraft.

TRMM is a joint mission between NASA and the Japanese space agency, JAXA.

Hurricane Dennis grew into a major hurricane as it moved north through the Caribbean Sea in July 2005.

These images show towering clouds and intense rain in Hurricane Danielle as the storm was intensifying into a major hurricane on August 27, 2010.