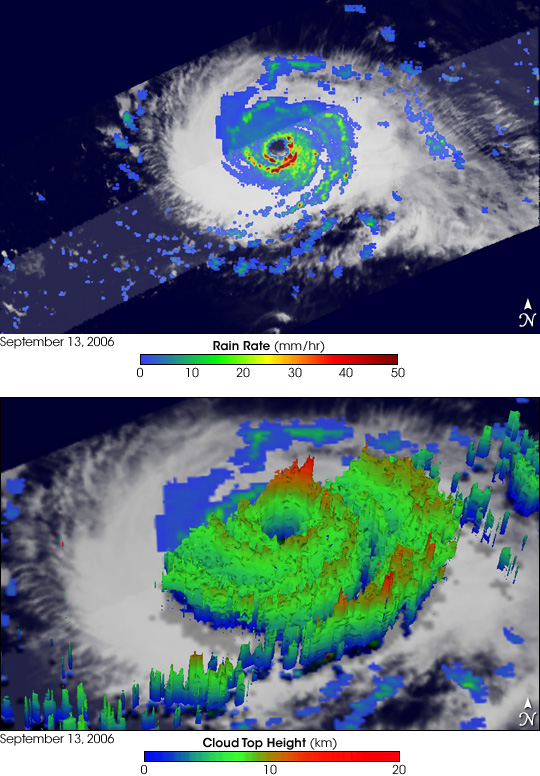 After a relatively mild start, the 2006 Atlantic hurricane season became more active with the arrival of the first major hurricane—Hurricane Gordon—in the Central Atlantic. The seventh named storm of the season formed on September 10, becoming a tropical storm the next day. With warm waters beneath the storm and calm upper-level wind patterns, Gordon was able to gather strength and become a Category 1 hurricane on September 11. By early September 15, it had become a Category 3 storm, according to the National Hurricane Center, making it the first major hurricane of the 2006 season. The previous two hurricanes, Ernesto and Florence, never intensified beyond Category 1 strength.

These images show Gordon at 2:00 p.m. local time (18:00 UTC) on September 13, 2006, as observed by the Tropical Rainfall Measuring Mission (TRMM) satellite. The top image shows rain rates (how fast the rain was coming down), with the heaviest rain in red and lighter rain in blue. Rain rates in the center swath are from the TRMM Precipitation Radar, while those in the outer swath are from the TRMM Microwave Imager. The rain rates are overlaid on infrared data from the TRMM Visible Infrared Scanner. The rain rates show that Gordon had a well-defined, clear eye (dark spot in the center of the white, cloudy region) surrounded by a complete eyewall (innermost green ring) embedded within areas of intense rain (dark red areas). The banding patterns (the distinctive hurricane-shaped spirals) were pronounced, with tight curvature. These signs pointed to a strong, mature circulation pattern within the storm.

The lower image provides a three-dimensional view of the storm as seen from TRMM’s Precipitation Radar. From this perspective, too, Gordon shows signs of becoming an intense hurricane. A tall red tower in the northeastern eyewall points to rapidly rising air (deep convection). In the tower, water vapor is condensing into cloud droplets and releasing heat into the storm. The heating, known as latent heating, and subsequent rising of air lower a storm’s central air pressure, which drives the storm’s circulation. By causing the pressure to drop, latent heating and convection cause the storm to intensify. As a result, tall towers are a good indicator that a storm is about to intensify.

At the time of this image, Gordon’s maximum sustained winds were estimated to be 147 kilometers per hour (92 miles per hour) by the National Hurricane Center, making it a strong Category 1 storm. Shortly after this TRMM overpass, Gordon was upgraded to a strong Category 2 storm. Gordon reached Category 3 intensity later that same evening. The hurricane, however, was nowhere near land, and as of September 15, it was projected to weaken over cooler waters as it veered northeast in the general direction of the Azores Islands.

The TRMM satellite was placed into service in November 1997. From its low-earth orbit, TRMM provides valuable images and information on storm systems around the tropics using a combination of passive microwave and active radar sensors, including the first precipitation radar in space. TRMM is a joint mission between NASA and the Japanese space agency, JAXA.

Hurricane Gordon was the seventh named storm of the 2006 Atlantic hurricane season. Gordon started off the Leeward Islands in the Caribbean on September 10, and it grew in power and size steadily over the next several days.

These images show towering clouds and intense rain in Hurricane Danielle as the storm was intensifying into a major hurricane on August 27, 2010.

Formation and Decay of Hurricane Bertha

Bertha strengthened as it slowly moved west over the warm waters of the Atlantic Ocean. Bertha grew from a tropical storm to a major hurricane (Category 3 storm).