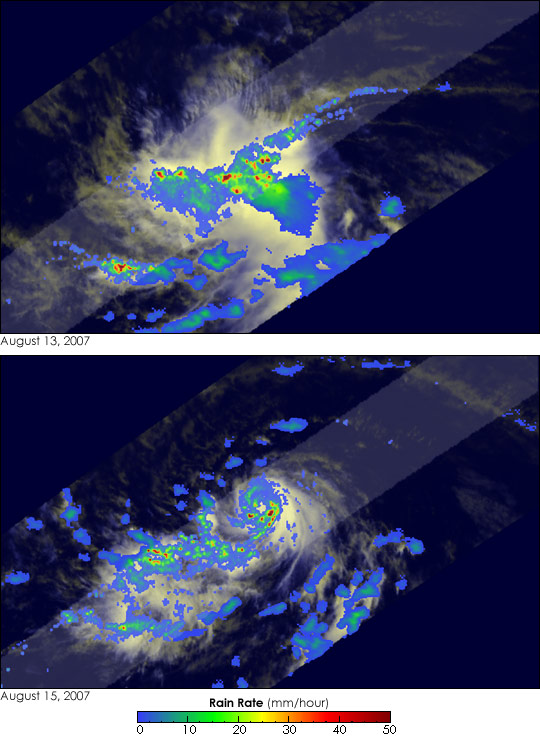 After a relatively quite period, the 2007 Atlantic hurricane season began to heat up with two active storms forming in the second full week of August. This pair of images, taken by the Tropical Rainfall Measuring Mission (TRMM) satellite, shows the development of Tropical Storm Dean between August 13 and August 15. During that period, the storm tracked quickly westward across the Caribbean Sea, gradually growing into a tropical storm. The top image was taken on August 13, when Dean was in its earliest formative stage. Scattered dark red spots reveal the locations of pockets of heavy rain, but the storm doesn’t yet resemble the iconic hurricane. Rain rates in the center of the swath are from the TRMM Precipitation Radar, and those in the outer swath come from the TRMM Microwave Imager. The rain rates are overlaid on infrared data from the TRMM Visible Infrared Scanner.

By the time TRMM captured the lower image two days later, Dean had organized into a tropical storm with bands of rain circling the center of the storm. Although Dean was still a relatively small storm, it appeared to be fairly well-organized. Green, yellow, and red arcs of moderate to intense rain curve neatly around the eye of the storm, indicating that Dean has a well-formed circulation. The eye itself, not yet visible in the underlying infrared image, is also evident from the break in the rainfall field. When TRMM captured this image at 9:20 a.m. Eastern Daylight Time on August 15, Dean was still a tropical storm with sustained winds estimated at 50 knots (58 mph) by the National Hurricane Center. By the next day, Dean had grown into a full hurricane and was forecast to be the first major hurricane of the season.

TRMM is a joint mission between NASA and the Japanese space agency, JAXA.

After a relatively quiet period, the 2007 Atlantic hurricane season began to heat up with the formation of Hurricane Dean during the second full week of August.