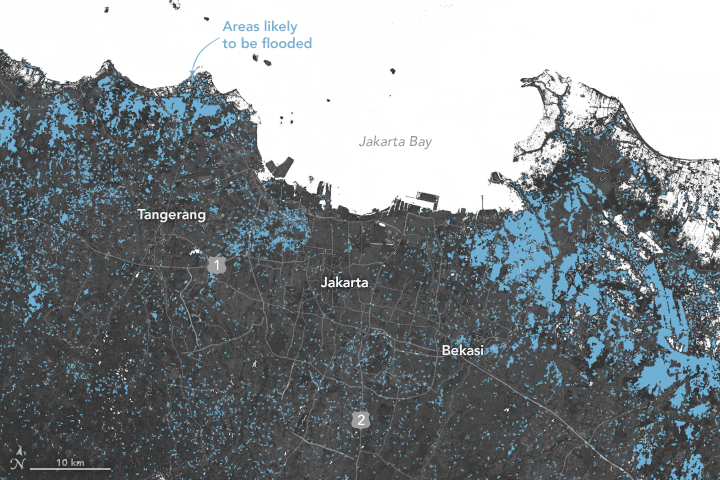 As the New Year rang in, torrential rains swept across Jakarta, Indonesia, bringing the capital’s worst rainfall in more than a decade. On December 31 and January 1, heavy rains poured over the city, triggering floods and mudslides, knocking out power, displacing about 175,000 people, and killing more than 60 people, according to media reports. As of January 6, 2020, at least 74 districts in Jakarta, West Java, and Banten had reported floods since the beginning of the year.

Indonesia’s Meteorology, Climatology and Geophysics Agency (BMKG) said the heavy rains were triggered by a convergence of wind patterns. Winds blowing from northeast of Java Island met moist winds from the Indian Ocean to the south, which led to the formation of massive rain-producing clouds. Additionally, high temperatures increased the amount of water vapor in the air.

Since the rains began, researchers at NASA and partner agencies have been analyzing satellite- and ground-based data to locate potentially flooded areas. The flood proxy map above highlights areas that were likely to be flooded (indicated in blue) as of January 2, 2020. The data is currently being used by the ASEAN Humanitarian Assistance center, which has been working with the Indonesian National Board for Disaster Management (BNPB) to guide emergency responders. The information has also been used in reports to inform the Indonesian public.

The map is derived from Synthetic Aperture Radar (SAR) data from the Copernicus Sentinel-1 satellites, operated by the European Space Agency (ESA). Though natural-color imagery of the flooded area has been hard to gather, radar can see through clouds day and night. The flood proxy maps were generated jointly by the Earth Observatory of Singapore (EOS) and the Advanced Rapid Imaging and Analysis (ARIA) team. ARIA is a joint collaboration between NASA’s Jet Propulsion Laboratory and the California Institute of Technology. The ARIA team was supported by the NASA Earth Science Disasters Program.

The team created the map by comparing radar observations collected before and after the rainfall. Specifically, the researchers look for changes in brightness: if a normally rough ground surface is replaced with a smooth water surface, the brightness of those pixels will change. The team compared the during-flood image to 72 satellite images taken since 2015.

“Each pixel has a different history. Some pixels correspond to bare ground, and other represent areas of vegetation or buildings,” said Sang-Ho Yun, disaster response lead for the ARIA team at JPL. “Looking at individual pixel values over time gives a better idea of the area’s usual variation and likelihood of flooding.”

In addition to satellite data, Yun and colleagues used ground data collected by a non-profit called Yayasan Peta Bencana. The group has developed an open source software that scans social media sites for keywords such as ‘banjir’ (the Bahasa Indonesian word for “flood”), sends an auto-reply to the creator of the post to confirm the flooding, and asks follow up questions about conditions in the area for crowdsourced flood reports. These reports are plotted on a live public web map in real-time.

“This is the first time that we were able to rapidly generate a flood proxy map from so many satellite scenes and calibrate it with ground observations,” said Yun. “This is really important for mapping flood extent in urban areas.”

As of January 7, BNPB reported that the number of displaced people has been reduced significantly, and flooding as subsided in Bogor Regency and West Jakarta. However, meteorologists predict that extreme weather and heavy rainfall will likely occur again next week—a cycle that could repeat until February.

In January 2020, Jakarta experienced its worst rainfall in more than a decade.

Standing on the ground, it is impossible to gauge the full scope of a disaster the size of the Kosi River floods in northeastern India. On August 18, 2008, the river, swollen with monsoon rains, burst through an embankment into an old channel. By September 2, the river’s course still took it over populated land that had not been prone to flooding in the past. To grasp the full extent of this flood, you need the view from space.

This view of airplanes stranded on a flooded airport tarmac highlights the seriousness of the flood disaster unfolding in Bangkok, Thailand.