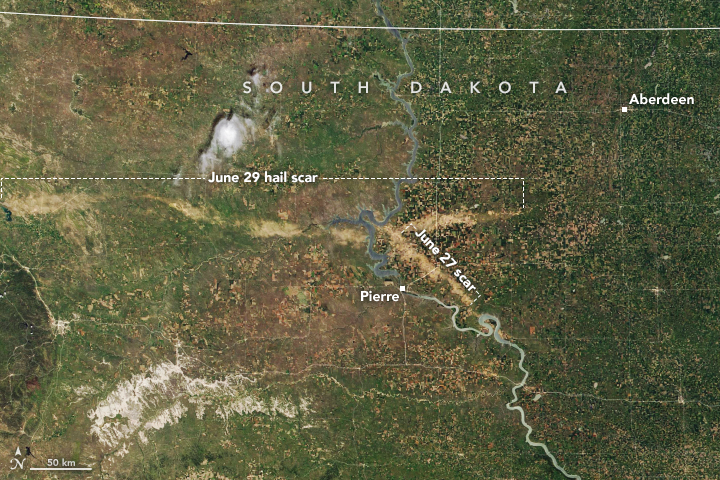 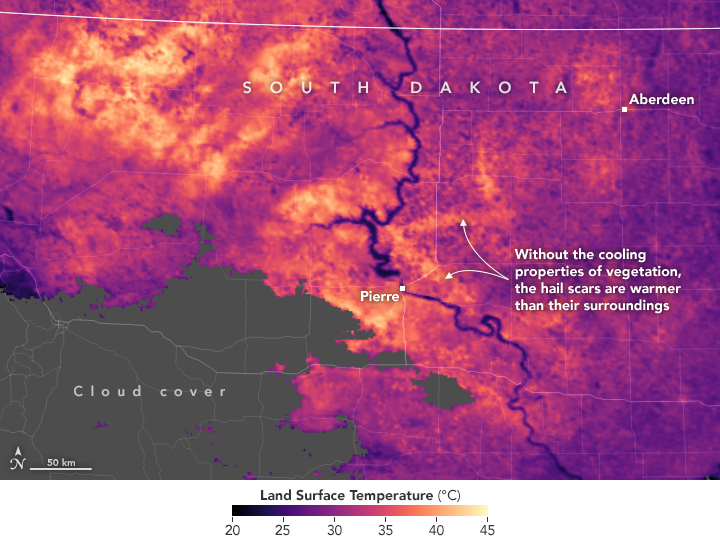 The long lines of damage visible in these satellite images of South Dakota may look like a product of tornadoes. However, the width of the damage swath—well over 10 kilometers (6 miles) in many areas—is a clue that it was hail that pummeled these croplands. According to Jordan Bell, a research meteorologist with NASA’s Short-term Prediction Research and Transition Center (SPoRT), tornado tracks rarely appear wider than a few kilometers.

The storms that produced these hail swaths came in a one-two punch, according to a summary from the National Weather Service. The first arrived on June 27, 2018, charting a southeasterly path of destruction as it moved across Sully and Stanley counties, narrowly missing the city of Pierre, South Dakota. A second storm left an even longer swath, stretching from the Wyoming-South Dakota border for hundreds of miles before ending east of the Missouri River. Some areas reported hail larger than 4 inches (10 centimeters) in diameter, about the size of a grapefruit. The large hail—in conjunction with strong winds—stripped corn stalks bare and pummeled soybean leaves.

“Crops and grasslands can present a very uniform and green background when observed from space. With wind-driven hail capable of shredding the vegetation, the storm damage becomes visible in satellite imagery,” explained Bell. Following a similar event in South Dakota in 2003, researchers noted that the hail scar remained visible in satellite imagery for about six weeks.

The top image was captured on July 7, 2018, by the Moderate Resolution Imaging Spectroradiometer (MODIS) on NASA’s Terra satellite. The damage was pronounced enough that it even elevated land surface temperatures, visible in the map above. “In the damaged areas, land surface temperatures are higher than in the surrounding areas because the bare soils heat up faster than in the non-damaged, vegetated areas,” said Bell. 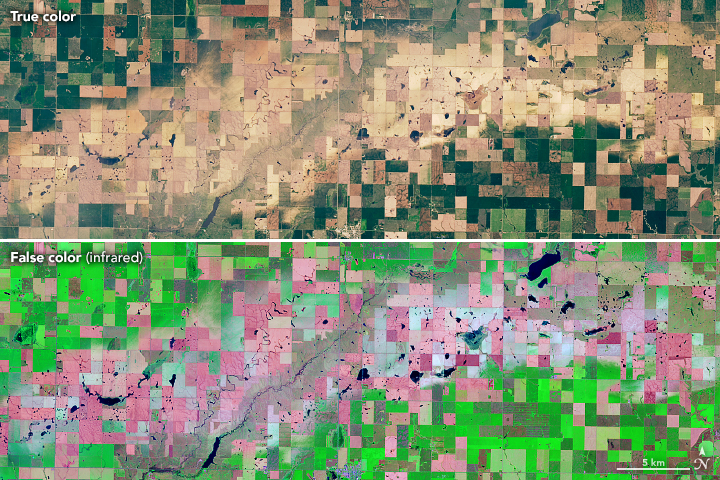 The warmer temperatures within the damage swath are likely altering how and where warm air rises—a process called convection. Since convection is a critical ingredient in the formation of thunderstorms, some research suggests that these changes may cause or intensify thunderstorms in the region for the coming days and weeks.

The third image shows a more detailed view of damage just north of Onida, as observed two days later in both natural and false color by the Operational Land Imager (OLI) on Landsat 8.

When thunderstorms drive hail and strong winds over crops and grasslands, they can draw long scars across the landscape.

Hail pummeled a long stretch of crops in South Dakota in June.

Scientists at Marshall Space Flight Center use satellite imagery to help meteorologists assess the scope of damage caused by tornadoes.

A line of thunderstorms with hurricane-force winds caused widespread damage to crops.