A Haven For Snowbirds 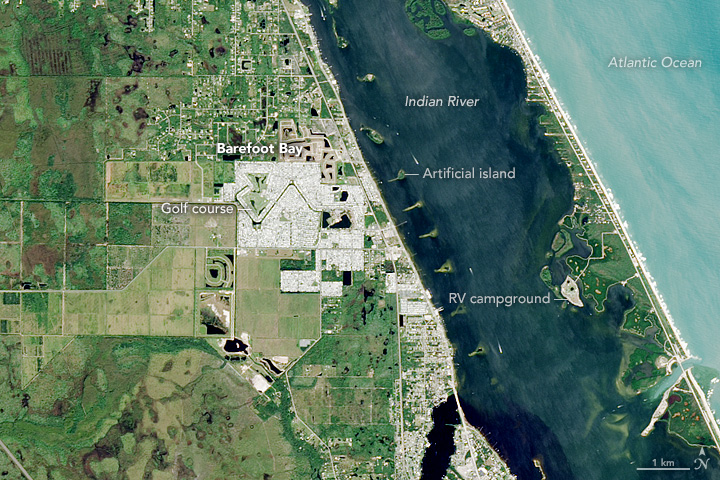 Every winter, more than one million people from Canada and northern parts of the United States, many of them retired, head to Florida to escape the cold. These temporary winter residents—so-called snowbirds—increase the state’s population by roughly 5 percent.

Many snowbirds end up staying in communities like Barefoot Bay, one of the largest communities of manufactured homes in Florida. Established in 1969 in southern Brevard County, Barefoot Bay has a population of roughly 10,000 people, many of whom are drawn to its affordable homes and recreational offerings. Proximity to the Indian River and the Atlantic Ocean gives residents easy access to fishing, boating, and swimming.

On October 22, 2016, the Operational Land Imager (OLI) on Landsat 8 captured this image of Barefoot Bay. With few trees and closely-packed residential neighborhoods, Barefoot Bay appears light gray in comparison to some of the leafier suburbs around it. A drainage canal connects the golf course on the western side of the community with a lake on the eastern side. A mixture of farmland and pastureland (light green), undeveloped land and nature preserves (dark green), and suburbs (gray) surround Barefoot Bay. The developed barrier island east of Barefoot Bay is an RV campground popular with snowbirds.

Note the difference in the color of the water in Indian River and the Atlantic Ocean. Watersheds adjacent to the Indian River have undergone significant development in recent decades, so the river absorbs significant inputs of nutrients, sediment, and other substances from septic tanks, farms, lawns, city streets, and other sources. This can change the clarity of the water, and in recent years, elevated nutrient levels have led to several large algae blooms.

The line of islands in the Indian River were created when the area was dredged in the 1950s to make the Atlantic Intracoastal Waterway. The spoils were used to form 137 different islands, which are now managed by the Florida Department of Environmental Protection and used for wildlife conservation, educational programs, and recreation.

Snow and ice cover the landscape around this basin of Lake Michigan.

Following a Raindrop from New York to Newport News

A drop of water that falls in central New York takes a long ride to the sea. It flows past some extraordinary natural features that help tell the story of how the Chesapeake Bay came to be.

Filaments and Color in Rupert Bay

Wild patterns on the water's surface are evidence of the fluid dynamics that occur when fresh river water meets sea water.