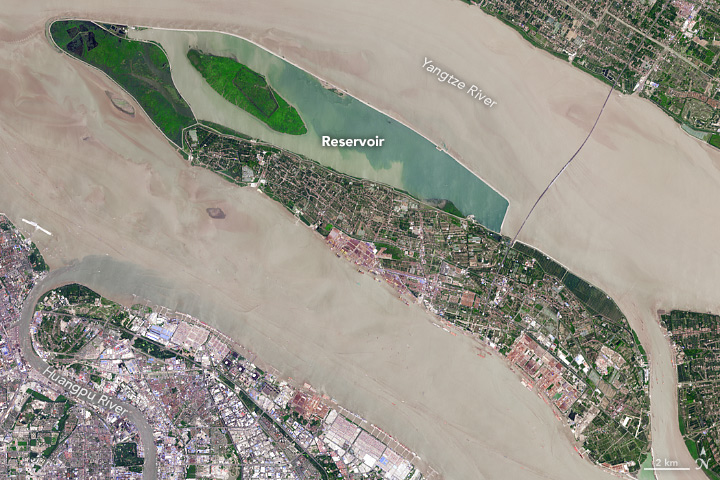 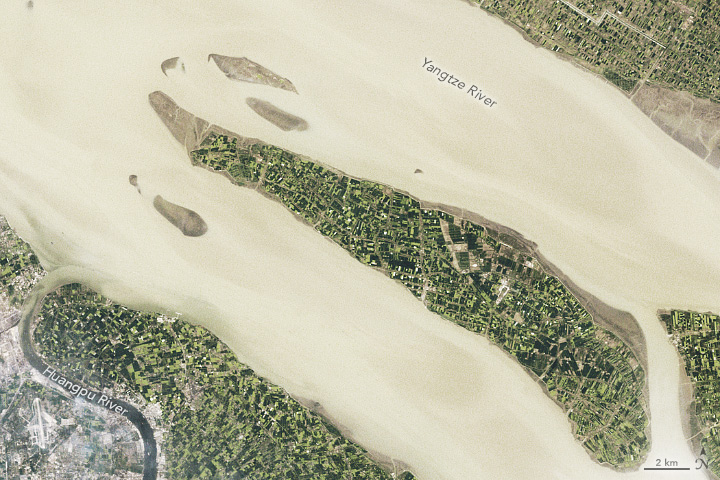 Editor’s Note: The following story is based on our new feature World of Change: Sprawling Shanghai.

As Shanghai has spread out and rapidly industrialized over the past several decades, many of its waterways have become heavily polluted. Just 3 percent of the water in the city is clean enough to drink or use for aquaculture, one census of water resources found.

Meanwhile, Shanghai’s population has swollen to roughly 24 million people. To help meet the growing demand for fresh water, the city opened Qingcaosha Reservoir on Changxing Island in 2010. On July 20, 2016, the Operational Land Imager (OLI) on Landsat 8 captured this image of the reservoir. The second image shows the same area in 1984. The reservoir, which spans about 70 square kilometers (27 square miles) and has a capacity of 430 million cubic meters, supplies about 70 percent of Shanghai’s tap water.

Purer water within the reservoir appears blue; the more polluted, sediment-filled water of the Yangtze and the Huangpu rivers is brown. Qingcaosha’s water is drawn from deep within the middle of the Yangtze, which tends to be less polluted than the edges. The green wetlands in the northwestern portion of the reservoir help cleanse the water naturally, while serving as habitat for several types of birds and fish.

The water from Qingcaosha is significantly cleaner than water in the Yangtze or Huangpu. However, managers still contend with regular outbreaks of algae caused by high levels of phosphorus and nitrogen in the Yangtze. To help control the algae, the Shanghai Municipal Water Authority recently released large numbers of chub and carp into the reservoir, according to Shanghai Daily.

Qingcaosha is closely guarded by police. Though officers use helicopters, speedboats, and foot patrols to monitor for intruders, they regularly catch people fishing there illegally, according to China Daily.

A new study found that the abundance of these floating plants has increased due to urbanization.

An arid region grew even drier between 2003 and 2009 due to human consumption of water for drinking and agriculture.