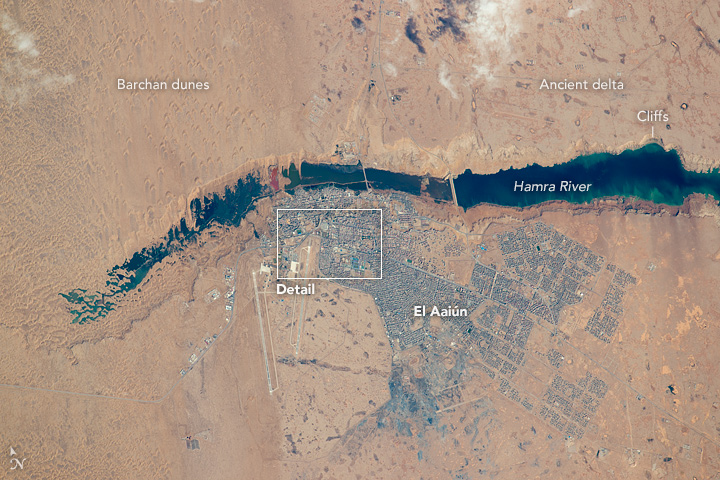 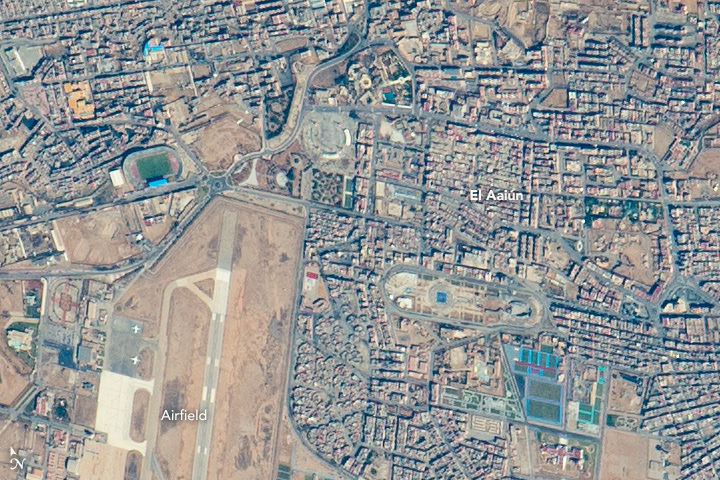 An astronaut aboard the International Space Station (ISS) put his or her earth-observation training to work in recognizing an unusual river that vanishes in a sand field well before it reaches the sea. The Hamra River (As Saquia al Hamra in Arabic) ends about 15 kilometers (9 miles) from the Atlantic Ocean in a dark blue lake. The river has cut into the landscape, making low cliffs on both sides. The river has its source in the mountains 300 kilometers (185 miles) inland, and it provides a persistent water supply for El Aaiún, the biggest city in Western Sahara. One of the most sparsely populated countries in the world, Western Sahara has a population of nearly half a million people; nearly 40 percent of them live in El Aaiún.

The photograph was taken with the most powerful lens aboard the space station, and city blocks are easily detected in the gray cityscape. Even the white landing-marker lines on the airfield runways are visible, showing that the astronaut perfectly synchronized the camera’s view-finder with the moving target. This allowed for one the best ground resolutions that can be achieved from the ISS: close to 3 meters per pixel.

Small horn-shaped dunes are visible at the top left of the top image. The horns of these crescent dunes point south in the direction of dune movement. Sand from the dunes falls down the cliffs, making a spiky shoreline at the west end of the lake, and the dune field effectively prevents the river from reaching the sea. The dunes also restrict the westward expansion of the town. But scattered developments occupy an ancient delta of the river (top right) on more stable ground, where darker patches still indicate prior courses of the river.

Astronaut photograph ISS046-E-46013 was acquired on February 21, 2016, with a Nikon D4 digital camera using an 1150 millimeter lens, and is provided by the ISS Crew Earth Observations Facility and the Earth Science and Remote Sensing Unit, Johnson Space Center. The image was taken by a member of the Expedition 46 crew. The image has been cropped and enhanced to improve contrast, and lens artifacts have been removed. The International Space Station Program supports the laboratory as part of the ISS National Lab to help astronauts take pictures of Earth that will be of the greatest value to scientists and the public, and to make those images freely available on the Internet. Additional images taken by astronauts and cosmonauts can be viewed at the NASA/JSC Gateway to Astronaut Photography of Earth. Caption by M. Justin Wilkinson, Texas State U., Jacobs Contract at NASA-JSC.