Red Sprites Above the U.S. and Central America 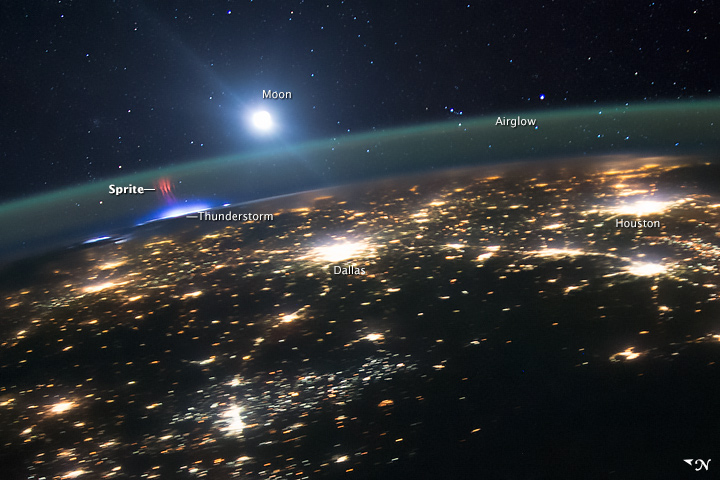 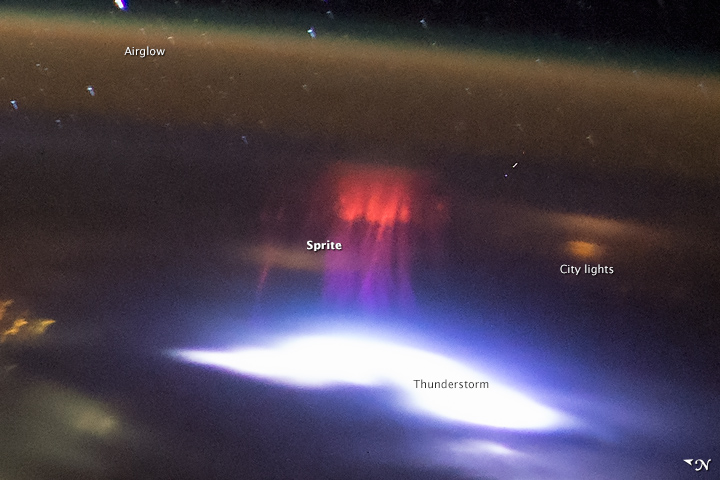 Viewing from a point over northwest Mexico, astronauts aboard the International Space Station looked northeast and shot this unusual photograph of a red sprite above the white light of an active thunderstorm. In the top image, the sprite was 2,200 kilometers (1,400 miles) away, high over Missouri or Illinois; the lights of Dallas, Texas appear in the foreground. The sprite shoots up to the greenish airglow layer, near a rising moon.

Two minutes and 58 seconds later, as the ISS was over the coastal Mexican resort of Acapulco, the crew documented another red sprite (lower image) over a brilliant white thundercloud and lightning discharge near the coast of El Salvador. The shorter distance to the storm—about 1,150 km (710 miles)—makes it somewhat easier to see details of the sprite. City lights are a diffuse yellow because they are shining through clouds.

These photos show the sprite’s tendrils reaching as much as 100 kilometers above Earth’s surface. Sprites are major electrical discharges, but they are not lightning in the usual sense. Instead, they are a cold plasma phenomenon without the extremely hot temperatures of lightning that we see underneath thunderstorms. Red sprites are more like the discharge of a fluorescent tube. Bursts of sprite energy are thought to occur during most large thunderstorm events. They were first photographed in 1989.

Astronaut photographs ISS044-E-45553 and ISS044-E-45576 were acquired on August 10, 2015, with a Nikon D4 digital camera using a 28 millimeter lens, and are provided by the ISS Crew Earth Observations Facility and the Earth Science and Remote Sensing Unit, Johnson Space Center. The images were taken by a member of the Expedition 44 crew. The images have been cropped and enhanced to improve contrast, and lens artifacts have been removed. The International Space Station Program supports the laboratory as part of the ISS National Lab to help astronauts take pictures of Earth that will be of the greatest value to scientists and the public, and to make those images freely available on the Internet. Additional images taken by astronauts and cosmonauts can be viewed at the NASA/JSC Gateway to Astronaut Photography of Earth. Caption by M. Justin Wilkinson, Texas State University, Jacobs Contract at NASA-JSC.

Soils in the center of the continent—including those around the famous rock formations of Uluru and Kata-Tjuta—come in striking shades of red.

A Trail of Night Lights

This composite image was made from more than 400 photos taken as the International Space Station traveled from Namibia toward the Red Sea.