Greater Denver and the Front Range 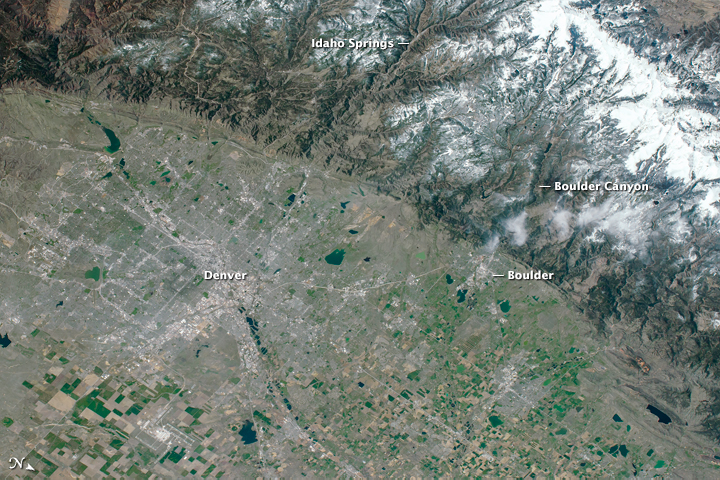 Astronauts on the International Space Station recognize the smooth, broad bend that separates mountains and plains as the Front Range of the Rocky Mountains. This sudden break between plains and mountains makes Denver one of the most spectacular cities in the United States.

Canyons cut through the snow-covered mountains. Boulder Canyon provides water to the city of Boulder, while tourists exploring the Rocky Mountains pass through Idaho Springs in the Clear Creek valley.

The plains fronting the mountains are now heavily populated. The cities and urban counties centered on Denver have an estimated population of 2.7 million people. The rectangular plot of highways and main roads gives the cityscape a blocky appearance—a pattern that has spread southward more than 40 kilometers (25 miles) to the wooded hills south of the town of Parker.

Rich farmland competes with urban land uses areas in the fertile Platte River valley (bottom right of the image) and surrounding plains north of Denver. This intensively farmed area appears from space as a pattern of numerous smaller plots. Less intensive land-use areas (such as spring and winter wheat) are marked by much larger plots of land, as seen around Denver’s international airport.

Astronaut photograph ISS043-E-156572 was acquired on April 29, 2015, with a Nikon D4 digital camera using a 140 millimeter lens, and is provided by the ISS Crew Earth Observations Facility and the Earth Science and Remote Sensing Unit, Johnson Space Center. The image was taken by a member of the Expedition 44 crew. The image has been cropped and enhanced to improve contrast, and lens artifacts have been removed. The International Space Station Program supports the laboratory as part of the ISS National Lab to help astronauts take pictures of Earth that will be of the greatest value to scientists and the public, and to make those images freely available on the Internet. Additional images taken by astronauts and cosmonauts can be viewed at the NASA/JSC Gateway to Astronaut Photography of Earth. Caption by M. Justin Wilkinson, Texas State University, Jacobs Contract at NASA-JSC.

A smooth, broad bend separates mountains and plains on the edge of the Rocky Mountains. 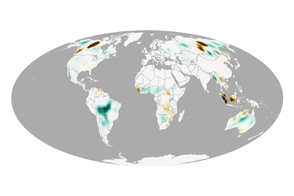 This photo-like image paints a picture of the movement of air and weather over the Ural Mountains in southern Russia, with the western mountains covered with snow and the eastern plain dry. The image also illustrates the influence of the mountains on cloud formations.