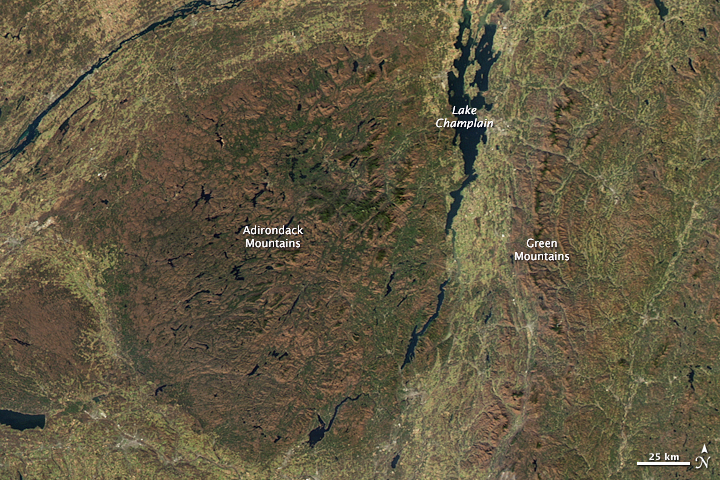 By November, the flame of red and orange that painted the forested mountains of the northeastern United States in the autumn has faded into subdued shades of orange and brown. The fall leaf season is coming to an end. This true-color image of the Adirondack and Green Mountains was captured on November 8, 2009, by the Moderate Resolution Imaging Spectroradiometer (MODIS) on NASA’s Aqua satellite. The mountains are brown, the farmed valleys, gold. The differences in color help reveal the unique geography of the region.

The Adirondack Mountains are a clustered together, a circle rather than a chain. The mountains are made of ancient rock, more than a billion years old, recently uplifted in a dome starting about five million years ago. The mountains continue to rise two to three millimeters per year. Straight valleys, many containing dark-colored rivers or lakes, cross the dome northeast to southwest like long scratch marks. Though the valleys resemble the striations of glaciers on a rock, they formed along faults. Veins of green evergreen forest are visible throughout the mountains now that the leaves of the surrounding deciduous forest are gone. Water drains down and around the dome into the valleys that surround it. Lower elevation land around the Adirondack Dome is light green or gold.

The two mountain ranges, so different in origin, are separated by Lake Champlain. While the valley that contains the lake formed in the faulting associated with the formation of the Green Mountains, it gained its current shape from water and ice. In the last ice age 20,000 years ago, the valley was covered in a river of ice, a glacier that carved out the current shape of the valley. When the glacier receded, sea water rushed into the valley. Eventually, the land rose in elevation as the weight of the ice disappeared, and the Champlain valley was cut off from the Atlantic. Freshwater replaced salt water, creating the lake seen in this image.

The large image provided above is the highest resolution image available. The image is available in additional resolutions from the MODIS Rapid Response System.