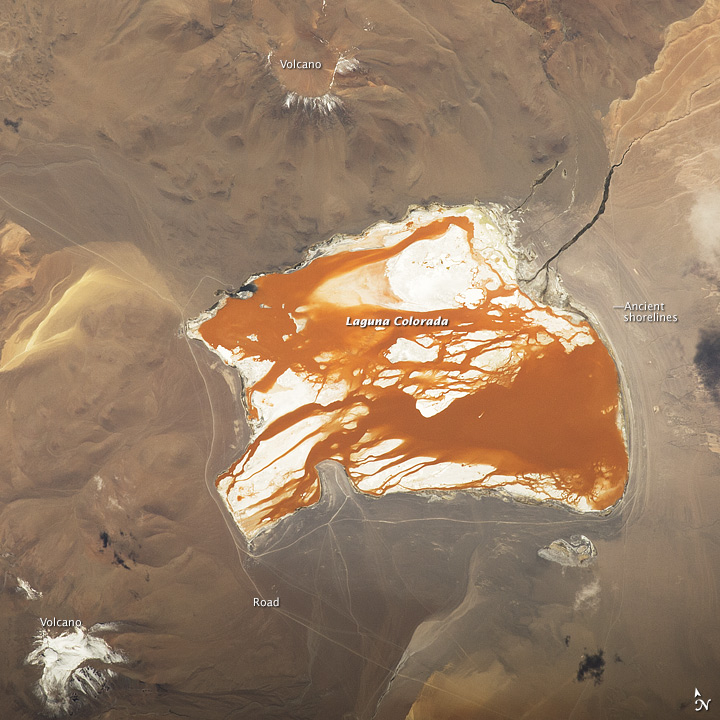 An astronaut aboard the International Space Station took this photograph of the brightly colored Laguna Colorada in the Bolivian Andes Mountains. The lack of atmospheric haze at high altitude—the lake sits 4,300 meters above sea level (14,100 feet)—helps make images of the region especially clear.

The strong red-brown color of this shallow, 10 kilometer (6 mile) long lake is derived from algae that thrive in its salty water. Occasionally the lake has green phases as well because different algae display different colors. The type of algae at any given time is determined by the changing salinity and temperature of the water. As lake water evaporates in the desert climate, it becomes saline. Ancient shorelines show that the lake has been larger in the past.

Laguna Colorada is the center of a wildlife reserve, and it was listed in 1990 as a “Ramsar Wetland of International Importance.” The lake is home to vast numbers of flamingos.

Snow-capped volcanoes appear at the top center and lower left. Access roads on three sides of the lake are used by tourists to visit these other-worldly landscapes.

Astronaut photograph ISS043-E-122588 was acquired on April 16, 2015, with a Nikon D4 digital camera using a 400 millimeter lens, and is provided by the ISS Crew Earth Observations Facility and the Earth Science and Remote Sensing Unit, Johnson Space Center. The image was taken by a member of the Expedition 43 crew. The image has been cropped and enhanced to improve contrast, and lens artifacts have been removed. The International Space Station Program supports the laboratory as part of the ISS National Lab to help astronauts take pictures of Earth that will be of the greatest value to scientists and the public, and to make those images freely available on the Internet. Additional images taken by astronauts and cosmonauts can be viewed at the NASA/JSC Gateway to Astronaut Photography of Earth. Caption by M. Justin Wilkinson, Texas State University, Jacobs Contract at NASA-JSC.

The salty and brightly colored lake in the Bolivian Andes is an important wetland.

Salt and algae lend color to the bed of this desert lake in Iran.