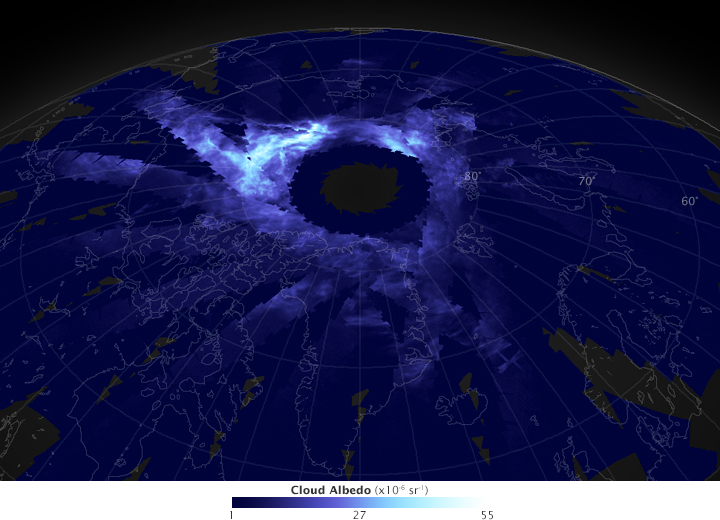 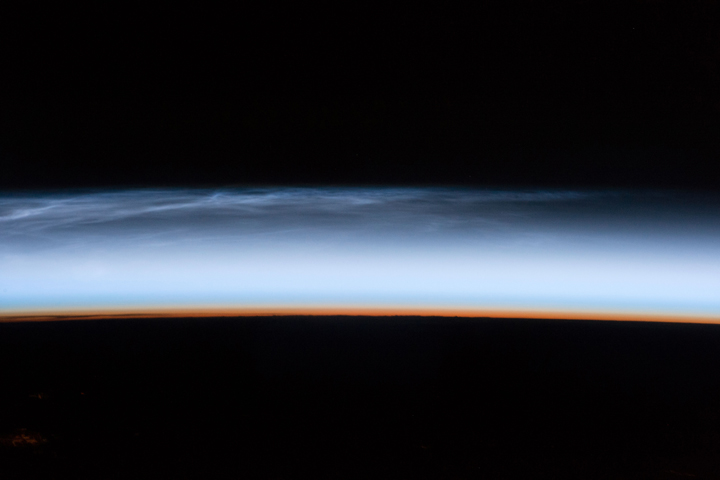 In the late spring and summer, unusual clouds form high in the atmosphere above the polar regions of the world. As the lower atmosphere warms, the upper atmosphere gets coooler, and ice crystals form on meteor dust and other particles high in the sky. The result is noctilucent or “night-shining” clouds (NLCs)—electric blue wisps that grow on the edge of space.

NASA’s Aeronomy of Ice in the Mesosphere (AIM) spacecraft observed noctilucent clouds on June 10, 2015. The top image is a composite of several satellite passes over the Arctic, and the clouds appear in various shades of light blue to white, depending on the density of the ice particles. The instrument measures albedo—how much light is reflected back to space by the high-altitude clouds. The second image is a photograph that was taken on June 8 by an astronaut on the International Space Station. The noctilucent clouds appear as thin tendrils at the top of the atmosphere.

Noctilucent clouds were first described in the mid-19th century after the eruption of Krakatau. Volcanic ash spread through the atmosphere, making for vivid sunsets around the world and provoking the first known observations of NLCs. At first people thought they were a side-effect of the volcano, but long after Krakatau’s ash settled, the wispy, glowing clouds remained.

In the past decade, AIM has been observing and measuring these seasonal, high-altitude cloud formations. Researchers have found that they are appearing earlier and stretching to lower latitudes with greater frequency. There is some evidence that this is a result of increased greenhouse gases in the atmosphere.

Though they were not thick enough to appear in AIM imagery, some noctilucent clouds were visible to ground-based observers in the continental United States on June 9 and 10. “Noctilucent clouds have appeared over the continental United States a number of times in recent years, and this is definitely of scientific interest,” said Cora Randall, an atmospheric scientist at the University of Colorado and a key investigator for AIM. “We are still trying to understand why atmospheric conditions near the summer polar mesopause might be changing to be more conducive to cloud formation.”

Science writer and astronomer Tony Phillips noted on spaceweather.com: “At the moment, NLCs over the United States are little more than wan ripples. As summer unfolds, however, they could turn into something truly bright and eye-catching.” He added some viewing tips: “Look west 30 to 60 minutes after sunset when the sun has dipped 6° to 16° below the horizon. If you see luminous blue-white tendrils spreading across the sky, you may have spotted a noctilucent cloud.”