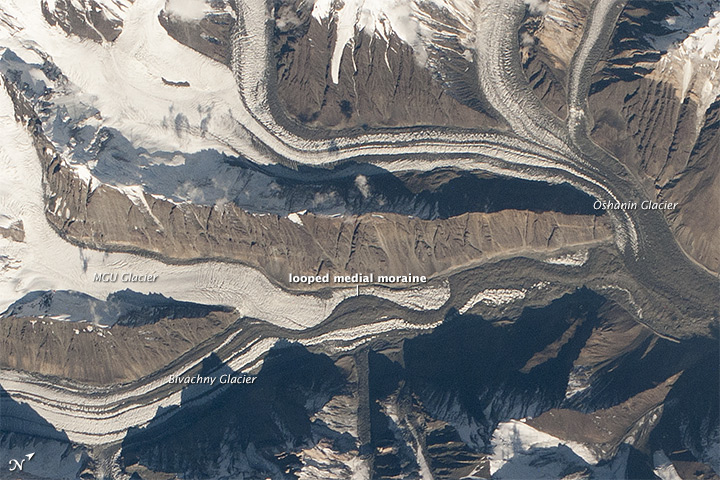 Of the approximate 200,000 glaciers on Earth, about 1 percent of them are classified as “surging.” Most glaciers flow at a fairly steady rate, but surging glaciers lurch forward in bursts, in some cases flowing 10 to 100 times faster than normal for short episodes. Though it varies by individual glacier, surges usually last less than a year and occur every 15 to 100 years, according to the National Snow & Ice Data Center.

If you can get to a glacier’s terminus, surging is easy enough to identify. In fact, it was so obvious at Black Rapids Glacier in Alaska in 1937 that it inspired headlines such as ”Runaway Glacier” and “Glacier Develops Wanderlust.” But most glaciers are so remote and difficult to reach that monitoring surges from the ground poses serious logistical challenges.

However, surging glaciers do leave telltale clues that are detectable from the air and from space. One important clue that a glacier is surging: its surface will contain distinctive curved lines called looped medial moraines. Medial moraines are ridges of debris that form in the middle of an ice flow when ice from two glaciers merge. Non-surging glaciers contain medial moraines as well, but they are generally straight. It’s when a surging glacier encounters a slower-moving glacier that spectacular loops, bends, and kinks develop.

Bivachny Glacier, a surging glacier in Tajikistan, contains a textbook example of looped medial moraines. Notice in this photograph taken from the International Space Station how the fairly straight moraines of Bivachny begin to warp as they encounter ice from MGU glacier. The snaking pattern downstream of the junction of the two glaciers offers a record of the ongoing push-and-pull taking place. When Bivachny is not surging, MGU glacier pushes forward, partly blocking off Bivachny’s flow. As ice backs up and pressure builds, Bivachny eventually surges forward and pushes MGU’s dam back. When Bivachny’s surge slows down, MGU creeps back and the cycle starts anew. Based on field work and studies of satellite imagery, scientists believe that Bivachny has gone through at least three distinct surges in the second half of the 20th Century.

Astronaut photograph ISS029-E-11283 was acquired on September 29, 2011, with a Nikon D3X digital camera using a 300 millimeter lens, and is provided by the ISS Crew Earth Observations Facility and the Earth Science and Remote Sensing Unit, Johnson Space Center. The image was taken by the Expedition 29 crew. It has been cropped and enhanced to improve contrast, and lens artifacts have been removed. The International Space Station Program supports the laboratory as part of the ISS National Lab to help astronauts take pictures of Earth that will be of the greatest value to scientists and the public, and to make those images freely available on the Internet. Additional images taken by astronauts and cosmonauts can be viewed at the NASA/JSC Gateway to Astronaut Photography of Earth. Caption by Adam Voiland. 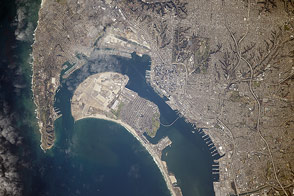 The moraines of Malaspina glacier display a dizzying pattern of curves, zigzags, and loops.