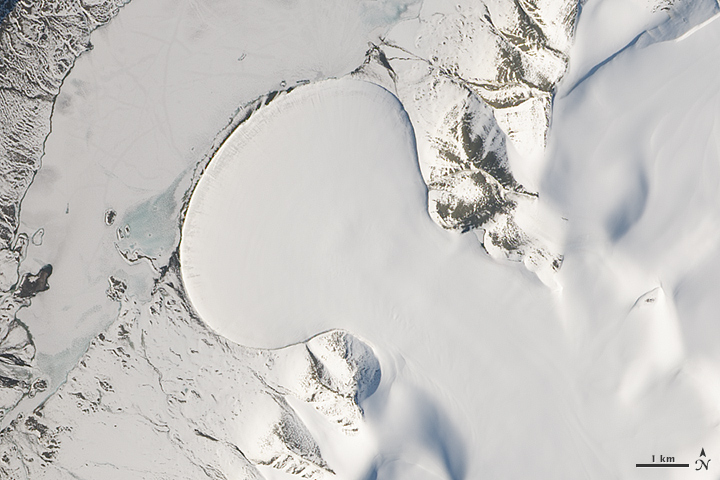 Pour batter onto a griddle and watch the mixture spread out into a round-shaped pancake. The movement is similar to the flow of piedmont glaciers, which form when ice spills from a steep valley onto a relatively flat plain. These glaciers are known for their nearly symmetric, fan-shaped lobes.

The shape of Greenland’s Elephant Foot Glacier, for example, is so distinct that it stands out dramatically from its surroundings when viewed from space. The Operational Land Imager (OLI) on Landsat 8 acquired this image of the glacier on June 21, 2014.

Located in northeastern Greenland on the Kronprins Christian Land peninsula, the glacier is not connected to Greenland’s main ice sheet. Rather, it’s part of a network of glaciers and ice caps that pepper the periphery of the island. Research has shown that as a whole, these outlying glaciers and ice caps account for 5 to 7 percent of Greenland’s total ice coverage, but they are responsible for 20 percent of its contribution to sea level rise.

Elephant Foot Glacier is just one of the beautiful scenes contained within an image swath acquired from across the Arctic by Landsat 8. To interactively explore the entire swath and to view more image highlights, read the full story here.

The glacier atop Iceland’s Ok volcano was declared dead in 2014. Satellite images show the latter stages of its decline.