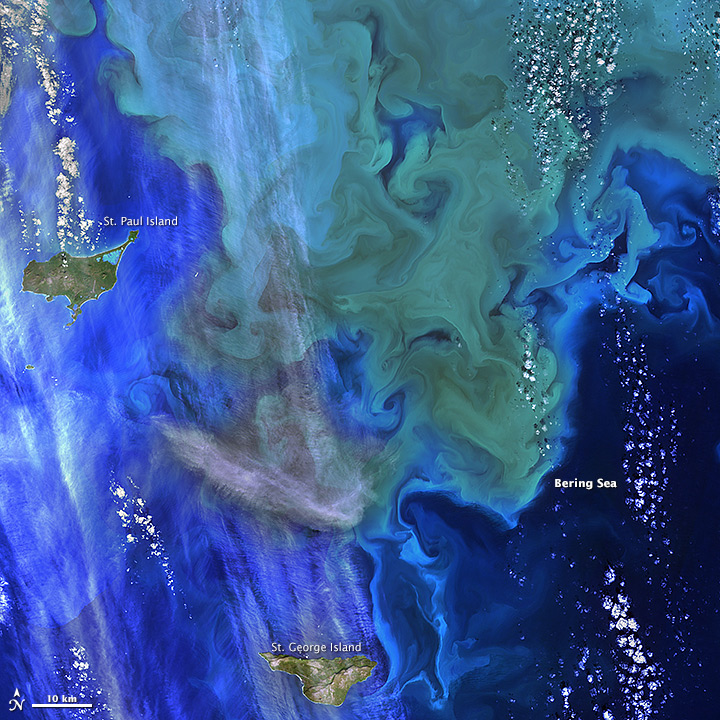 The Operational Land Imager (OLI) on Landsat 8 captured this view of a phytoplankton bloom near Alaska’s Pribilof Islands on September 22, 2014. The Pribilofs are surrounded by nutrient-rich waters in the Bering Sea. The milky green and light blue shading of the water indicates the presence of vast populations of microscopic phytoplankton—mostly coccolithophores, which have chalky calcite scales. Such phytoplankton form the foundation of a tremendously productive habitat for fish and birds.

Blooms in the Bering Sea increase significantly in springtime, after winter ice cover retreats and nutrients and freshened water are abundant near the ocean surface. Phytoplankton populations plummet in summertime as the water warms, surface nutrients are depleted by blooms, and the plant-like organisms are depleted by grazing fish, zooplankton, and other marine life. By autumn, storms can stir nutrients back to the surface and cooler waters make better bloom conditions.

The complicated interaction and feedback between water conditions, predators, and plankton populations was the subject of a recent paper by Mike Behrenfeld, a phytoplankton ecologist at Oregon State University. He notes that most discussions of blooms center on the physical conditions that initiate blooms. But the “dance of the plankton” is more complicated and it may involve ocean grazers—predators of phytoplankton—and other marine disturbances a bit more than previously suspected.

Together with colleagues at four institutions, Behrenfeld has developed a “disturbance-recovery hypothesis” in which blooms tend to be started by any process that disturbs the natural balance between phytoplankton and their predators. A disturbance may involve deep mixing of the surface ocean by storms, which brings up deep ocean water along coasts (coastal upwelling). It can involve a river plume carrying extra fresh water or sediment into the ocean. Such changes affect the health and location of both the phytoplankton and the creatures that consume them. How plankton ecosystems recover from a disturbance determines how large a bloom may grow.