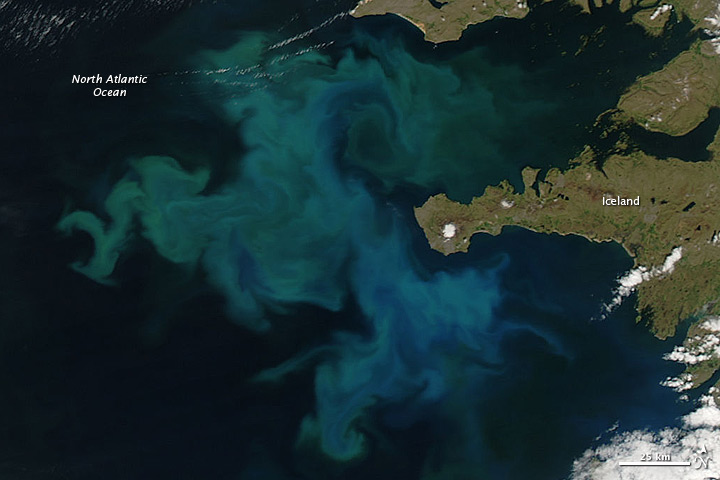 Most scientists think that phytoplankton are dormant in the winter and flourish in the spring because an increase of sunlight, warmer temperatures, and abundant nutrients. However, recent research suggests that the bloom might instead be connected to winter storms. An analysis of ten years of data from the Sea-viewing Wide Field-of-view Sensor (SeaWiFS) on the SeaStar satellite showed that the phytoplankton bloom might actually start in the middle of the winter and then continue unchecked until late spring when the blooms fade.

Why would phytoplankton grow when conditions would seem to be worst? Winter storms, it turns out, churn the ocean, mixing surface waters with deeper waters. The churning water drags surface-dwelling phytoplankton into deeper waters, distributing the organisms throughout the water. Since the phytoplankton are more widely distributed, predators (zooplankton) have a harder time locating and feeding on them. Because they are not being eaten so fast, the abundance of phytoplankton begins to increase.

Throughout the winter, the ocean continues to be stirred by winds and storms, and phytoplankton continue to increase in number. Spring brings gentler weather. The deep mixing that happened in the winter ends. Phytoplankton in deep water get trapped there, while phytoplankton near enough to the surface to receive sunlight start to grow faster. The growth is a boon for zooplankton, who now have ready access to an easy-to-find feast. The intensified feeding effectively checks the more rapidly growing phytoplankton, so the bloom continues to build at about the same rate from winter through spring.

Eventually, the surface phytoplankton exhaust the available nutrients and slow their growth. Now, the zooplankton consume the phytoplankton more quickly than they can multiply, bringing an end to the spring bloom. The brilliant show of color ends until the next year.

This image of phytoplankton was produced by the MODIS Rapid Response System. The large image is the highest-resolution version of the image, but the image is available in additional resolutions.

July 2019 brought the latest display of a phytoplankton bloom that occurs every year in the North Atlantic Ocean.