The Glory of the New Year 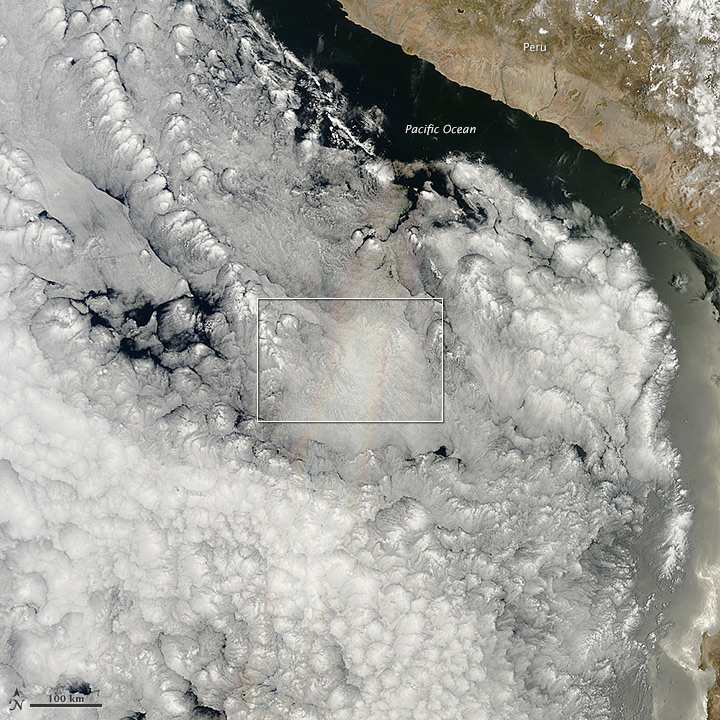 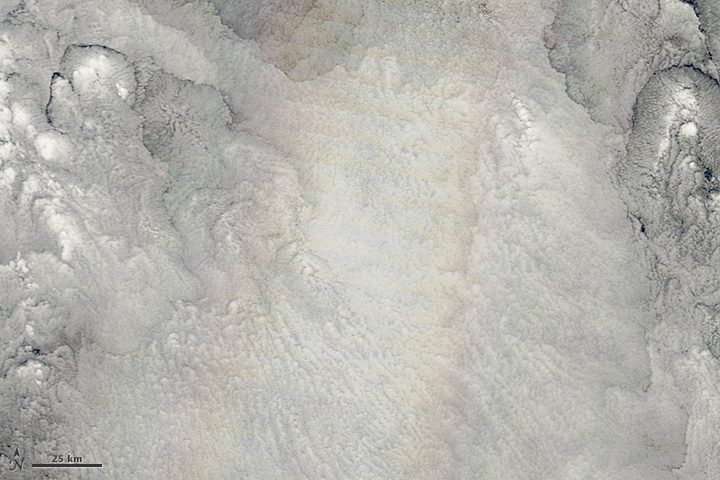 On December 21, 2013—the summer or winter solstice, depending on your hemisphere—the Moderate Resolution Imaging Spectroradiometer (MODIS) on NASA’s Terra satellite acquired this natural-color image. Off the Pacific coast of Peru, a rainbow-like optical effect known as a “glory” added a splash of color amidst the gray and white fluff of marine stratocumulus clouds.

For viewers on or near Earth’s surface, glories are occasionally visible as concentric rings of color in thin clouds or in fog. They appear in the opposite direction from the Sun as light is scattered backwards (diffraction) through airborne water droplets toward the viewer. The ring is centered around a point or shadow.

A similar phenomenon is sometimes visible from space, though a quick look at Earth Observatory’s image archives shows that space-viewed glories are not necessarily circular. To acquire images like the one above, the MODIS instrument scans the Earth in swaths perpendicular to the path of the satellite. The swaths are horizontal cross sections through the rings of the glory, so it appears instead as two elongated bands of color that run parallel to the path of the satellite.

The clouds in this image “are a pretty good example of ‘closed cell’ marine stratocumulus,” writes Joe Munchak, an atmospheric scientist based at NASA’s Goddard Space Flight Center. “These are typified by large regions of weak ascending air (forming the clouds) surrounded by narrow regions of descending air—the thin lines of clear air or thinner clouds surrounding the cells.”

The Terra satellite captured a rainbow-like optical phenomenon called a glory over the Pacific Ocean. Water droplets within clouds scatter light to produce the effect.