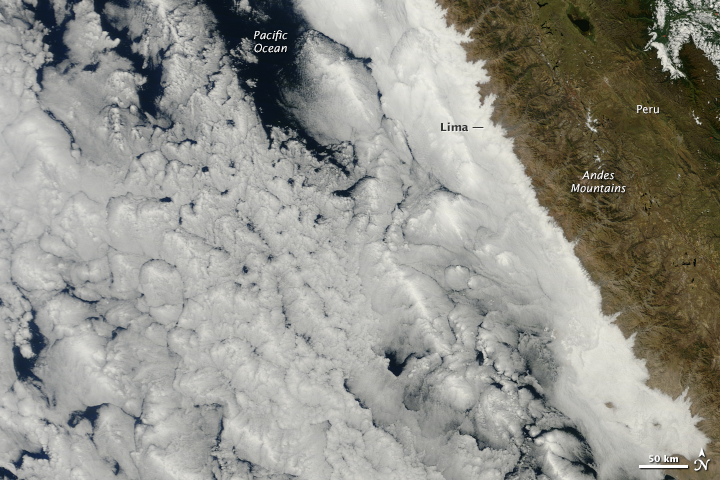 Ocean clouds meet the coastal desert in dramatic fashion on the coast of Peru, outlining the inland topography with precision. This image, acquired by the Moderate Resolution Imaging Spectroradiometer (MODIS) on NASA’s Terra satellite on May 28, 2014, illustrates the balance of nature’s extremes: dry versus wet and high versus low.

Formed in the moist ocean air, the clouds are closed-cell marine stratocumulus. Rounded and arranged in lines or waves, stratocumulus clouds form relatively low in the atmosphere. The closed-cell version of such clouds are usually shaped like a hexagon and surrounded by a channel of open air. Closed-cell clouds typically produce a light drizzle or no rain.

Peru’s southern coast, by contrast, is a desert. It is a landscape of sand dunes where the wettest areas get an average of 200 millimeters (8 inches) of rain per year. The air is dry, and no clouds have formed over the land.

The only clouds over the mainland have crept in from the ocean to cover the coastal plain, including the city of Lima. The marine clouds are low, just a few hundred meters off the ground, and they are stopped in their eastward movement by the Andes Mountains, says Joseph Munchak, a researcher at NASA Goddard Space Flight Center. This interaction with the topography makes the clouds outline river valleys. Low clouds or fog are so common over coastal Peru that locals have a name for the phenomenon: garúa. The garúa brings cold, drizzly weather.

At the Intersection of Coastal Peru and a Cloud Bank