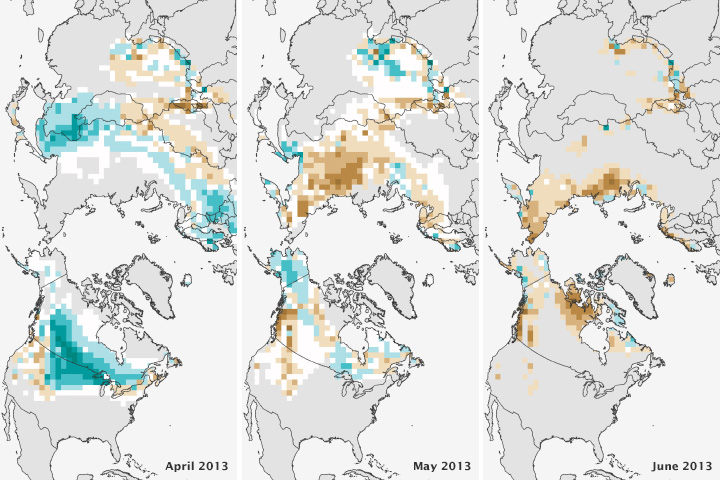 Perhaps nowhere on Earth is the transformation between seasons so extreme as in the Arctic, especially in the spring. Land that was frozen and snow-covered emerges to become tundra brush or grasslands or snow-free forest. The timing of this change is critical to the overall health of the planet, as snow and ice reflect solar energy back into space, effectively air conditioning the planet.

This climate cooling is greatest in the spring (March to June), when sunlight returns to the Arctic and the snow and ice have only just started melting. For this reason, any changes in spring snow and ice cover have a greater impact on Earth’s climate than changes at other times of the year.

In spring 2013, snow covered less area than the historical mean, with a new record low set in May in Eurasia, according to NOAA’s Arctic Report Card. The images above show snow day anomalies in April, May, and June; that is, they depict the percentage of days that snow cover was above or below the long-term average (1981-2010). Fewer snow days are represented in brown, while more snow days are shown in blue. The images are based on the weekly NOAA snow cover data records.

April had more days with snow cover than average because melting started late in northwestern Europe. However, once the melting started, it occurred rapidly, as shown in the May and June images. Eurasia reached a record low in May, and the snow cover extent in North America was at its fourth lowest in June. This lack of snow occurred because snow melted quickly, not because less snow fell during the winter.

The 2013 spring melt was in line with recent trends. Between 1979 and 2013, June snow cover extent dropped 19.9 percent per decade. This loss is greater than the loss of September sea ice, which decreased at a rate of 13.7 percent per decade over the same time period.

Images courtesy NOAA Climate.gov based on data from the Rutgers Snow Lab. Caption by Holli Riebeek.

The climate of Earth is changing; fewer days of snow cover is yet another indicator.

Snow and ice play an important role in keeping our planet cool, though not in the way you might think.

Image of the Day Heat Snow and Ice