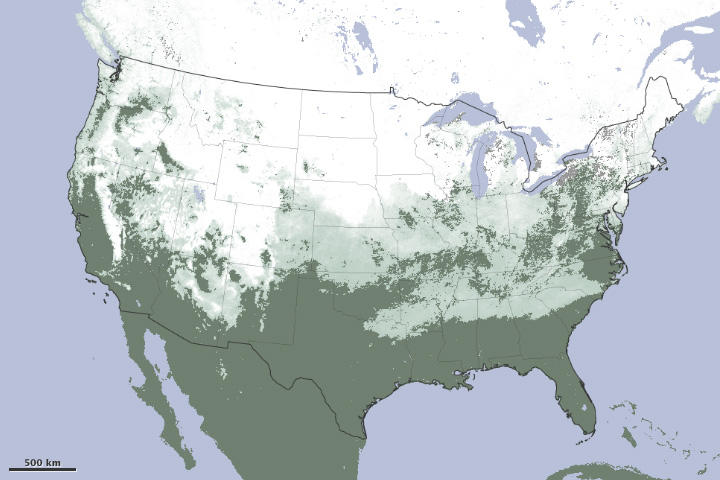 January 2011 was marked by a series of crippling snow storms across the United States. By January 12, about 71 percent of the country had snow on the ground, the fifth-largest snow cover extent in the last 45 years. This image, made with data from the Moderate Resolution Imaging Spectroradiometer (MODIS) on NASA’s Terra satellite (from the monthly snow cover product), shows the maximum snow cover for the month. The image shows that every state in the contiguous United States, with the exception of Florida, got snow in January.

The image provides a gauge for both snow extent and the length of time snow stayed on the ground. Areas that are white in this image were entirely covered with snow for most of the month. Pale green areas had snow for just part of the month or were only partly snowy, with areas of exposed ground. Dark green areas are places where MODIS did not observe snow during the month. The sensor does not see through clouds, so it does not see snow that is only on the ground on cloudy days.

With all the snow, it would be easy to think that the United States received plenty of winter moisture, but snow is deceptive. It takes about 10 inches of fresh snow to make an inch of liquid water when it melts. The winter storms brought more snow, but less rain to much of the United States, said the National Climatic Data Center. January 2011 was the ninth-driest January in the United States in 117 years. The southern half of the country was particularly hard hit. New Mexico experienced its driest January on record.