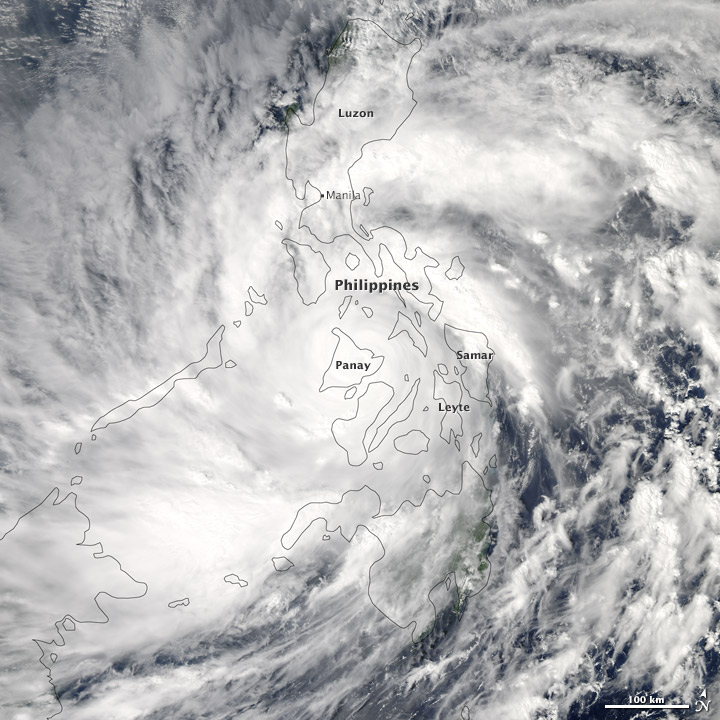 One of the most powerful typhoons on record slammed into the Philippines on November 7–8, 2013. Wind and flood damage to the region was expected to be extensive, but impassable roads and hampered communications systems made it difficult to assess the full impact to life and property.

The Moderate Resolution Imaging Spectroradiometer (MODIS) on NASA’s Aqua satellite acquired this natural color image of Super Typhoon Haiyan over the Philippines. The image was acquired at 2:10 p.m. local time (5:10 UTC) on November 8, 2013, when winds were estimated to be 270 kph (165 mph). The storm made landfall five different times as it skirted through the chain of islands. Click here to see the monster storm on November 7, before it roared ashore.

The National Disaster Risk Reduction and Management Council reported on November 8 that four people had died and seven were injured. However, cities and villages in the hardest hit areas of Leyte and Samar were cut off from most ground transportation and communications. A storm surge of anywhere from 3 to 5 meters (10-17 feet) hit the island of Leyte and its coastal capital of Tacloban; much of the local elevation is about 10 feet above sea level. By the night of November 9, reports of the death toll ranged from 138 to more than 1,200 people, and numbers were still rising as authorities inspected the wreckage.

News reports noted that as many as one million people took refuge in temporary shelters before the storm hit. Eduardo del Rosario from the disaster response agency told the Associated Press that a typhoon of similar strength killed 508 people and left 246 missing when it hit the Philippines in 1990. The nation has developed extensive plans for storm evacuations and warnings over the past two decades, but even the best planning cannot necessarily counter the potent forces of a category 5 storm.

Haiyan (Yolanda) is the 24th tropical storm to affect the island nation in 2013. It is now headed west toward Vietnam, where it is likely to arrive as a category 1 or 2 typhoon.

Typhoon Nock-Ten Over the Philippines

The typhoon was the strongest on record in the Northwest Pacific to make landfall so late in the year.

The category 3 storm swept over the Philippines on August 12, 2013.