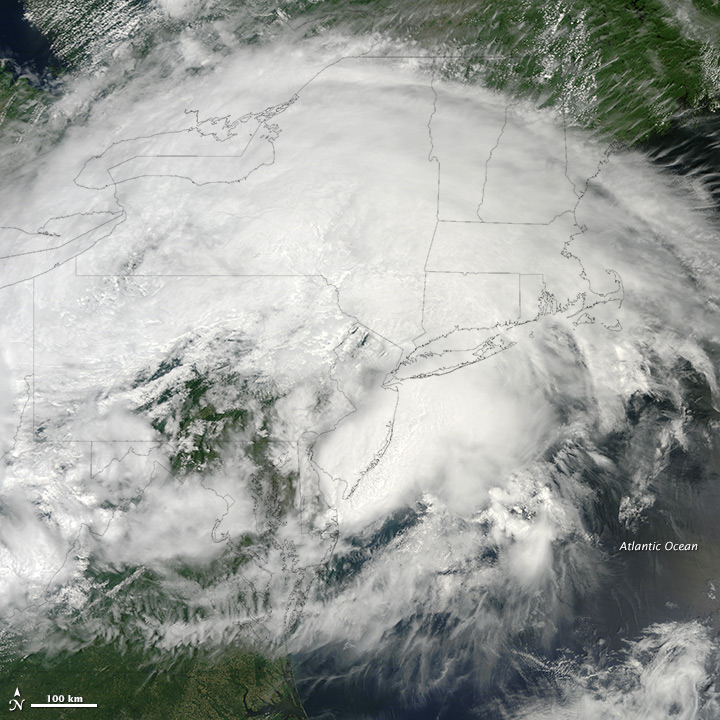 When meteorologists say derecho, which means “direct” or “straight ahead” in Spanish, they are referring to a widespread, long-lived wind storm associated with bands of fast-moving thunderstorms. This type of storm was given the name in the late nineteenth century, and they occur most often in the Midwestern and Great Lakes regions of the United States between May and July. To qualify as a derecho, a storm must cause damage over a 240-mile (400-kilometer) front/line and produce wind gusts of at least 58 miles (93 kilometers) per hour.

When a derecho barreled over the eastern United States in June 2012, the impacts were severe. That powerful storm brought hurricane-force winds to numerous states, killed 22 people, and knocked out electric power for millions. So people were bracing for the worst when a fierce line of storms was bearing down on the same area on June 13, 2013.

While the 2013 storm was not as powerful or destructive as the previous year’s event, the National Weather Service said it still qualified as a “low-end derecho.” Over a 15-hour period, the storm system generated 376 reports of damaging thunderstorm wind. In one part of Indiana, a storm cell brought winds of 90 to 100 miles (140 to 160 kilometers) per hour across an area seven miles long and three miles wide, according to meteorologist Jeff Masters.

The Moderate Resolution Imaging Spectroradiometer (MODIS) on NASA’s Terra satellite acquired this image of the storm system passing over the eastern United States on June 13 , 2013. While it is not possible to make out the band where thunderstorms were strongest because of cloud cover, a composite of radar images reveals a bow-shaped band of storms—called a bow echo—propagating east at 47 miles (75 kilometers) per hour.

While not as damaging as the fierce line of storms that arrived in June 2012, the thunderstorms that struck the eastern United States on June 13, 2013, qualified as a “low-end” derecho.

Although it arrived several weeks shy of the official start of the hurricane season, Subtropical Storm Andrea became the first named storm of the 2007 Atlantic hurricane season. By May 9, the storm’s winds reached 75 kilometers per hour (45 miles per hour).

Taken June 29, 2012, this photograph shows a shelf cloud on the leading edge of a violent storm system that blew across the eastern United States.

Winter Storm over the United States

Snow covers the desert Southwest in the wake of a winter storm that impacted much of the United States.