A Scene of Ice and Fire: Pavlof Volcano 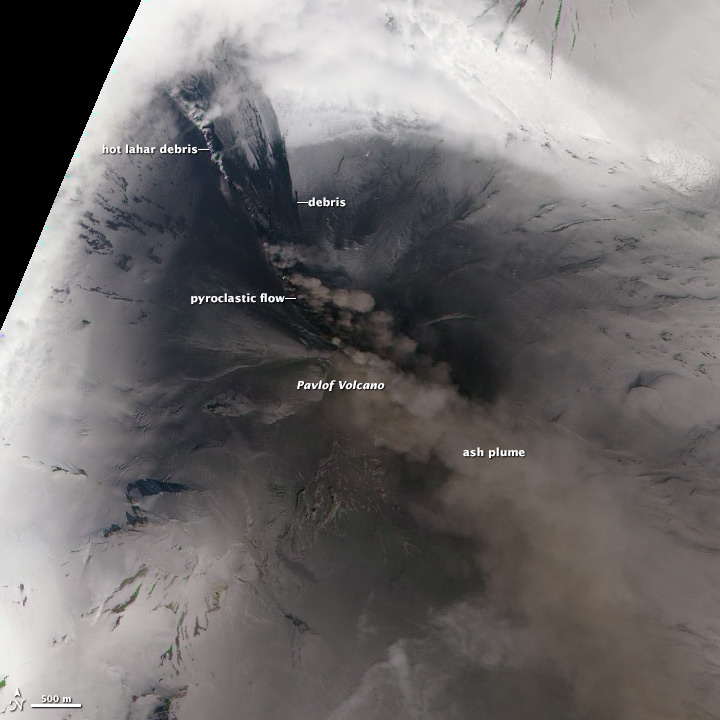 A towering ash plume, cascading debris, and steam explosions suggested that the eruption of Pavlof Volcano had intensified several days after it began. On May 16, 2013, the Alaska Volcano Observatory reported ash plumes reaching up to 12,000 feet (3,700 meters) above the volcano’s summit. The plumes were accompanied by lava fountains and a lava flow that descended the steep northern flank of the volcano.

This natural-color satellite image, collected by the Advanced Land Imager (ALI) on the Earth Observing-1 (EO-1) satellite, shows Pavlof on May 16, 2013. A brown ash plume blew from the summit towards the southeast, and gray ash from earlier explosions covered the snow on the volcano’s upper slopes. To the northeast, additional ash rose from an ongoing lava flow.

Explosive vaporization of snow by the hot lava and debris is likely converting a mild flow into a violent pyroclastic flow—an avalanche of extremely hot gas, ash, and volcanic rocks. Further to the northwest, rising steam and volcanic gases trace the path of the debris, a slushy mix of ash, rock fragments, ice, and water called a lahar. Additional debris from the flows left dark trails on Pavlof’s northern flank.

Located near the western end of the Alaska Peninsula, Pavlof isn’t a direct threat to any large cities or towns. However, ash from an eruption could disrupt air traffic from Asia to North America and Europe.

The Alaska Volcano Observatory first detected earthquakes associated with the movement of magma and heat at Pavlof’s summit on November 12, 2014. Photographs and satellite imagery confirmed an eruption soon after.

In November 2014, Alaska’s most active volcano rumbled back to life. 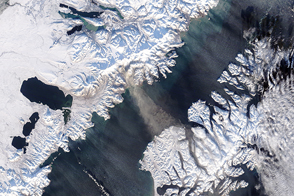 Snow and Ash Above Katmai

This plume of ash traces its origins to the 1912 eruption of the Novarupta volcano. 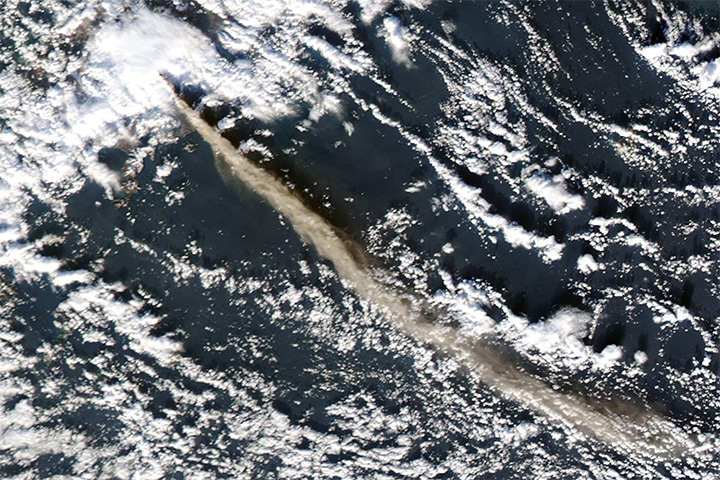 Ash Over the Gulf of Alaska

During a recent bout of activity, Veniaminof volcano rumbled and spit out ash, lava, and volcanic gases.