Melting on the Greenland Ice Cap 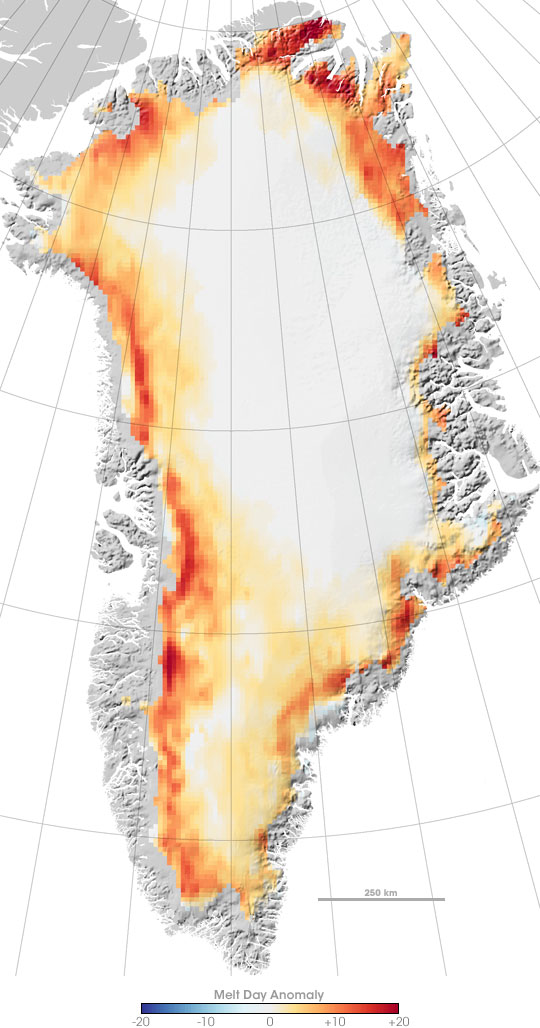 Dangling below the Arctic Circle, the ice sheet on Greenland is a vestige of the last ice age. Other ice sheets at its latitude have long since dwindled away, but the Greenland Ice Sheet persists, preserved largely because of its own tremendous size. But change is creeping over the ice sheet: glaciers on its edges are sliding into the Atlantic at an accelerating rate and pools of water puddle on the surface of the ice as the summer melt lengthens. Piece by piece, evidence has accumulated to show that the ice sheet is shrinking.

One such piece of evidence comes from the Defense Meteorological Satellites Program (DMSP-F13) Special Sensor Microwave/Imager (SSM/I), which records microwave energy emitted from the Earth’s surface. Because wet snow and dry snow look different in the microwave frequencies, measurements from the SSM/I tell scientists where and when the ice sheet is melting. Made from SSM/I data, this image compares the number of days melting occurred on the Greenland Ice Sheet in 2005 to the annual average number of melting days since 1988. Greenland is nearly entirely ringed in red and orange, showing that the summer melt season was much longer than average in 2005. Some regions, depicted in dark red, experienced up to 20 more melt days than average. No part of the ice sheet melted less than average.

While an increase in peripheral melting is significant, it doesn’t reveal, by itself, whether or not the entire ice sheet is actually shrinking. Other studies have documented above-average snowfall in parts of the interior of the ice sheet in some recent years. For scientists trying to determine whether the Greenland Ice Sheet is shrinking, the question is which process dominates. Are the edges of the ice sheet melting faster than the interior is gaining ice (net loss), or is the interior packing on weight faster than the edges are melting away (net gain)? Or are both processes in balance? Only with satellite observations of Greenland’s mass and elevation that have become available in recent years have scientists gathered the evidence they needed to begin to answer this question. A series of studies in 2006 and 2007 each concluded that the ice sheet has lost mass since 2002. More ice is melting away or crumbling into the ocean than is accumulating in the interior. To read more about how scientists are coming to understand what is happening to Greenland’s ice, see Greenland’s Ice Island Alarm, a feature article on the Earth Observatory.

(NASA map by Robert Simmon and Marit Jentoft-Nilsen, based on data from Marco Tedesco, GSFC.)

Thinner than the 2.3-kilometer-thick center, the outer edges of the Greenland ice sheet develop melt zones like the one shown here during the warm summer months.

The Melting Ice of Greenland

Sections of the Greenland Ice Sheet that end on land are slowing—a sliver of good news for sea level rise.