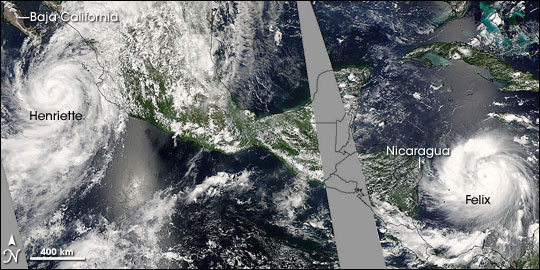 Within less than three hours on September 3, 2007, the Moderate Resolution Imaging Spectroradiometer (MODIS) on NASA’s Aqua satellite captured images of two separate hurricanes near Central America: Henriette off Baja California, and Felix off the coast of Nicaragua. This composite image shows the images collected in two consecutive orbits around the globe. Breaks in coverage between the orbits appear in gray.

At 12:30 p.m. local time (18:30 UTC) on September 3, MODIS observed Hurricane Felix heading toward Nicaragua. The following day, Felix came ashore as a Category 5 storm, with sustained winds of 260 kilometers (160 miles) per hour, according to the National Hurricane Center. Felix was the second Category 5 Atlantic storm in August; Dean pursued a more northerly track before slamming into the Yucatan on August 21. Felix was predicted to continue its westward journey over Honduras, El Salvador, Guatemala, and Mexico, causing potentially devastating floods.

At 2:10 p.m. local time (21:10 UTC) on September 3, MODIS observed Hurricane Henriette moving up the Pacific Coast. Henriette was the first Pacific hurricane of the season to make landfall. Storms that form in that part of the Pacific usually head west or northwest away from land. Compared to the thick, bright clouds of Hurricane Felix, Henriette’s swirling clouds appears more ragged and stretched out. Despite its greater size, Hurricane Henriette packed less of a punch than Felix; it was anticipated to travel through Mexico and the United States as a Category 1 storm.

Due to the large area covered by this scene, the high-resolution version of this image uses 500-meter-resolution data, not the sensor’s maximum spatial resolution (250 meters). For 250-meter-resolution images and more information on the individual storms, visit the Earth Observatory’s Natural Hazards pages on Felix and Henriette.

You can download a 500-meter-resolution KMZ file of the pair of hurricanes suitable for use with Google Earth.