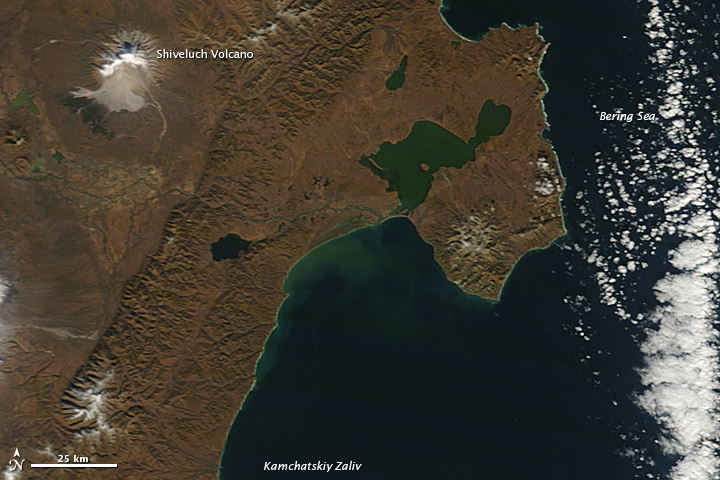 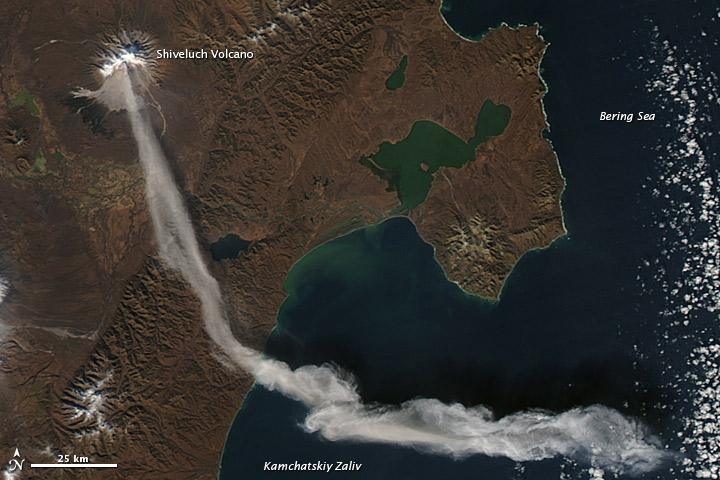 When NASA’s Terra satellite passed over Russia’s Kamchatka Peninsula at noon local time (00:00 Universal Time) on October 6, 2012, Shilveluch Volcano was quiet (top image). By the time NASA’s Aqua satellite passed over the area two hours later (bottom image), the volcano had erupted and sent a plume of ash over the Kamchatskiy Zaliv. The plume traveled about 90 kilometers (55 miles) toward the south-southeast, where a change in wind direction began pushing the plume toward the east.

On October 6, 2012, the Kamchatka Volcanic Emergency Response Team (KVERT) reported that the ash plume from Shiveluch reached an altitude of 3 kilometers (9,800 feet) above sea level, and had traveled some 220 kilometers (140 miles) from the volcano summit.

Shiveluch (also spelled Sheveluch) ranks among the biggest and most active volcanoes on the Kamchatka Peninsula. Rising to 3,283 meters (10,771 feet) above sea level, Shiveluch is a stratovolcano composed of alternating layers of hardened lava, compacted ash, and rocks ejected by previous eruptions. The beige-colored expanse of rock on the volcano’s southern slopes (visible in both images) is due to an explosive eruption that occurred in 1964. Part of Shiveluch’s southern flank collapsed, and the light-colored rock is avalanche debris left by that event. High-resolution imagery of Shiveluch shows very little vegetation within that avalanche zone.

On October 6, 2012, KVERT cited observations from the Moderate Resolution Imaging Spectroradiometer (MODIS) instruments on Terra and Aqua in detecting the Shiveluch eruption. This was not the first time that MODIS observed a Shiveluch eruption shortly after it started. In 2007, MODIS captured an image within minutes of the eruption’s start, before winds could blow the ash away from the summit.

Acquired a little less than two hours apart, these images show a volcano before and after it spewed an ash plume on October 6, 2012.

Shiveluch Volcano on the Kamchatka Peninsula of eastern Russia released a plume in early August 2009. Acquired on August 3, 2009, this true-color image shows a gray-beige plume blowing away from the summit and over the Bering Sea. 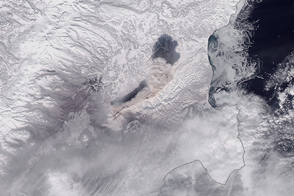 A Plume Advances Over Shiveluch

Ash from one of Kamchatka’s most active volcanoes headed toward Alaska.