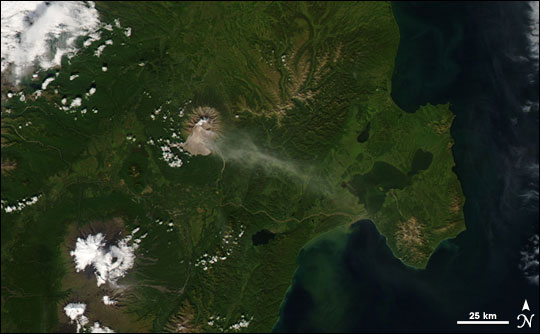 On August 3, 2007, the Shiveluch (Sheveluch) Volcano on the Russian Federation’s Kamchatka Peninsula released a plume as the Moderate Resolution Imaging Spectroradiometer (MODIS) on NASA’s Aqua satellite passed overhead. This image shows the volcanic plume blowing away from the summit toward the southeast. The plume’s gray-beige color suggests a composition of ash mixed with water vapor. This summertime shot also reveals the lush green of the surrounding landscape, interrupted by bare mountain ridges.

Shiveluch is a stratovolcano—a steep-sloped volcano composed of alternating layers of solidified ash, hardened lava, and volcanic rocks. One of Kamchatka’s largest volcanoes, it sports a summit reaching 3,283 meters (10,771 feet). Shiveluch is also one of the peninsula’s most active volcanoes, with an estimated 60 substantial eruptions in the past 10,000 years.

Shiveluch Volcano on the Kamchatka Peninsula of eastern Russia released a plume in early August 2009. Acquired on August 3, 2009, this true-color image shows a gray-beige plume blowing away from the summit and over the Bering Sea. 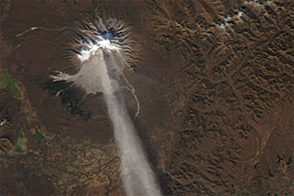 Acquired a little less than two hours apart, these images show a volcano before and after it spewed an ash plume on October 6, 2012.