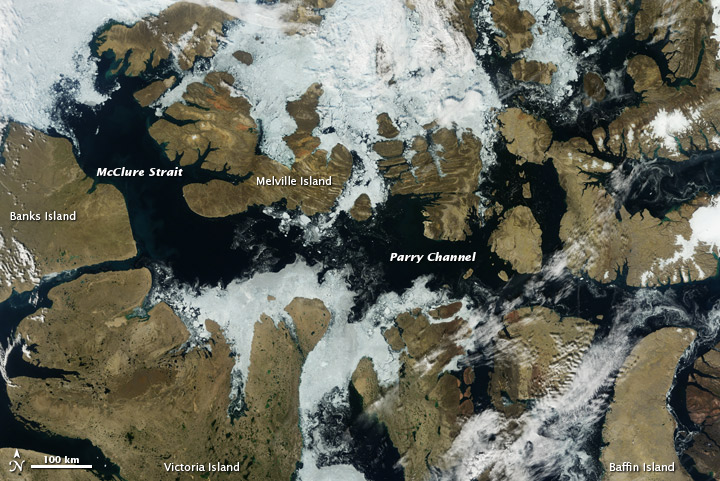 In late July 2012, sea ice retreated from Parry Channel in the Northwest Passage. The Canadian Ice Service reported that ice cover in the channel began to fall below the 1981–2010 median after July 16, and the ice loss accelerated over the following two weeks.

The Moderate Resolution Imaging Spectroradiometer (MODIS) on NASA’s Terra satellite captured this natural-color image of Parry Channel and McClure Strait (also known as M’Clure Strait) on August 2, 2012. Although Parry Channel was almost entirely ice free, some ice lingered between Melville and Victoria Islands. In this image, that ice varies in color from nearly white to dark gray.

For centuries, explorers and traders have sought an Arctic shipping shortcut between Europe and Asia. In the early twentieth century, Norwegian explorer Roald Amundsen managed to navigate the southern route of the Northwest Passage, although the journey took him nearly three years. Parry Channel occupies the northern or “preferred” route, which also opened in 2007. The southern route through the Northwest Passage opened in 2008.

According to reports from the Canadian Ice Service, ice appeared to retreat quickly from Parry Channel in late July and early August 2012, but the channel was probably not entirely open. In some cases, sea ice can be thin enough to escape detection by a satellite sensor, but still be thick enough to hamper navigation.

In late July 2012, sea ice retreated from Parry Channel in the Northwest Passage.