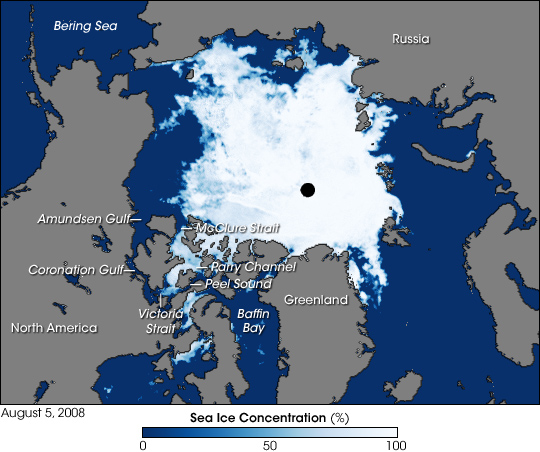 In the summer of 2007, as Arctic sea ice reached a record low, the Northwest Passage opened between Baffin Bay and McClure Strait (also known as M’Clure Strait). Passing through Parry Channel, this opening would be the route through the Arctic most conducive to large-scale shipping. As of early August 2008, Arctic sea ice was not expected to set a new melt record, although its extent was well below the long-term average. Whether the Northwest Passage would open as far north as it did the previous year remained in question, but the sea ice in a more southerly route—one taken by Norwegian explorer Roald Amundsen in the early twentieth century—had begun to melt.

This image shows the Arctic as observed by the Advanced Microwave Scanning Radiometer for EOS (AMSR-E) aboard NASA’s Aqua satellite on August 5, 2007. In this image, blue indicates open water, white indicates high sea ice concentration, and turquoise indicates loosely packed sea ice. The black circle at the North Pole indicates no data as the satellite does not make observations directly over the pole. Although ice blocks areas that opened in 2007, Peel Sound, Victoria Strait, Coronation Gulf, and Amundsen Gulf are largely ice-free.

Amundsen successfully navigated a southern route through the Northwest Passage between 1903 and 1906, becoming the first explorer to make such an achievement. In the decades that followed, southern portions of the Northwest Passage occasionally opened in late summer, but its longer route, narrower straits, and shallower depths make it a less-inviting shipping lane. Although the more favorable northern route was not open at the time this image was acquired, the possibility remained that the route would be free of ice before the summer melt season drew to a close in September.

This image shows sea ice around the Northwest Passage as observed by the Advanced Microwave Scanning Radiometer for EOS (AMSR-E) aboard NASA’s Aqua satellite on August 22, 2007. McClure Strait, Parry Channel, Victoria Strait, and McClintock Channel (north of Victoria Strait), all appear nearly ice-free. North of McClure Strait, an area of sea ice remains, but it is fragmented.

By mid-August 2016, the famed high-latitude sea route in the Arctic Ocean was open.