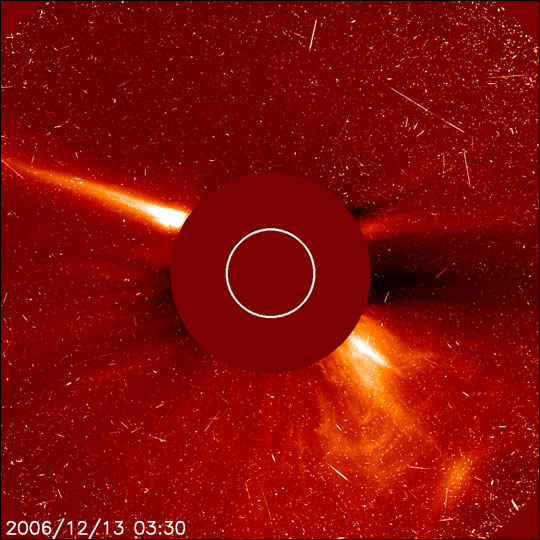 Above the visible surface of the Sun is a blanket of plasma, gas that is so hot that some atoms have become “unglued,” creating a free-flowing mixture of positively charged atomic nuclei and negatively charged electrons. Invisible to the naked eye except during a solar eclipse, this plasma, called the corona, is about 2 million Kelvin (3.6 million degrees Fahrenheit). Rapid eruptions of energy and particles at localized spots on the Sun are called solar flares. During a solar flare, the corona’s temperature typically increases by a factor of 5 to 10, but sometimes a flare can raise the temperature to 100 million Kelvin. The outflow of energy and particles is called a solar storm.

On December 13, 2006, the Sun unleashed a large solar flare and a stream of particles (a coronal mass ejection) that appears to be headed towards Earth. A shower of high-energy particles appeared as specks and white streaks on the imagers aboard NASA’s Solar and Heliospheric Observatory satellite, the primary watchdog for solar storms. This image was made with a coronograph, a special telescope that blocks light from the solar disk (the bright, visible circle of the Sun) to enable viewing of the fainter corona. The video clip (see links below) shows the coronal mass ejection emerging from behind the disk at lower right as a bright ray of light. Almost immediately the telescope is struck by the particles, which travel at half the speed of light.

Flares occur in active regions of the Sun where magnetic fields are strong. These active regions are home to sunspots, dark spots on the Sun’s surface that indicate areas of relatively cooler temperatures and especially strong magnetic flux. The source of the December 13 eruption was the very active region known to scientists as sunspot 930. The storm does not present a danger to the astronauts onboard the Space Shuttle and the International Space Station as they are within the Earth’s protective magnetic shield and in the protective walls of the spacecraft. However, the bulk of the cloud of particles from the coronal mass ejection could reach Earth in about a day or two. It might generate colorful aurora and pose some threat for satellites, communications equipment, and power systems on Earth. Currently, the stream of radiation and solar particles streaming by Earth is described by the National Oceanic and Atmospheric Administration (NOAA) as a Category S2 storm, which is a relatively mild event.