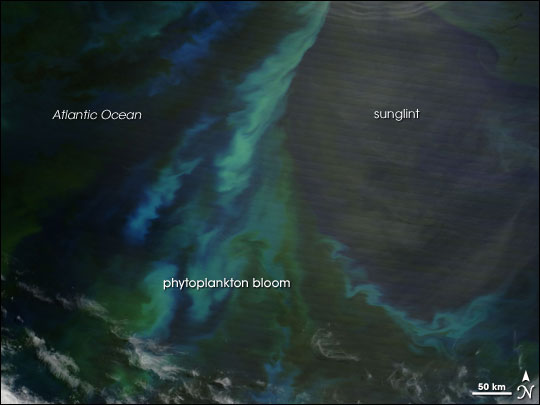 On December 5, 2006, a phytoplankton bloom sent colorful swirls through the southern Atlantic Ocean off the coast of Patagonia, Argentina. The Moderate Resolution Imaging Spectroradiometer (MODIS) flying onboard NASA’s Terra satellite captured this image the same day. In this image, iridescent blues and greens fan out over the water like an upside-down peacock tail. In the south, wispy clouds float overhead. To the east of the bloom, the ocean surface appears somewhat lighter than it does in the west. This results from sunglint, where the Sun’s light bounces off the ocean’s surface and reflects directly back into the satellite sensor. As MODIS orbits the Earth, it collects images of the planet’s surface by scanning small portions at a time, similar to how you read a page of text by reading one line at a time. In this image, the sunglint makes the scan lines more prominent.

Phytoplankton are microscopic plants that flourish near the water’s surface and form the basis of the marine food chain. Besides sunlight and water, phytoplankton need nutrients, which are usually more abundant in deeper waters than in surface waters. Phytoplankton blooms regularly occur off the Patagonian coast for a reason: it is the convergence zone between the warm, southbound Brazil Current near the coast and the cold, northbound Malvinas/Falkland Current farther out to sea. As the currents brush past each other, turbulent swirls and eddies form, causing cold, nutrient-rich water to well up toward the surface from deeper in the ocean. These rich waters provide a buffet to eager, growing phytoplankton. The resulting blooms can be seen from space. These blooms frequently occur in the Southern Hemisphere springtime.

A 250-meter-resolution KMZ file of the bloom is available for use with Google Earth.