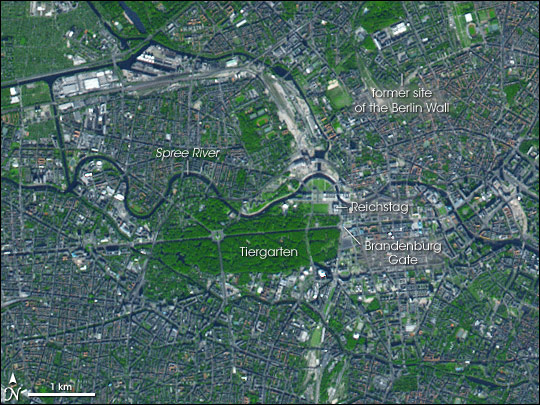 Germany’s largest city and capital, Berlin has appeared in historical records since the 14th century, and has been a capital city of the surrounding kingdom, empire, or nation since the beginning of the 18th century. Like many capital cities, Berlin has seen its share of strife. Shortly after World War II bombings devastated the city, Cold War superpowers divided it into East and West Berlin. Between August 1961 and November 1989, a wall running though the city reinforced the political divide. After a reduction in tensions between East and West allowed Berliners to cross the wall, it was torn eventually down.

This image, acquired by the Advanced Spaceborne Thermal Emission and Reflection Radiometer (ASTER) on NASA’s Terra satellite on October 15, 2005, shows a portion of the city where the Berlin Wall once divided it. Prominent in this image is the Tiergarten. This park was largely deforested for firewood after World War II, but today is lush and green compared to its urbanized surroundings. Just east of the park is Brandenburg Gate. Built near the end of the 18th century, this gate once served as a formal entrance to the city of Berlin, but the Berlin Wall temporarily forced its closure. Gray or brown colors, straight lines, and sharp angles provide the characteristic indications of urban settings. Pockets of trees or other vegetation make a green checkerboard among streets and buildings. Among the city’s interesting buildings is the Reichstag, the building that houses the German parliament. North of the park, the Spree River meanders through the heart of Berlin. Canals stretch northward in an arc from the river.

From the wreckage of World War II, Poles rebuilt a part of their 800-year history in the midst of a thoroughly modern city.