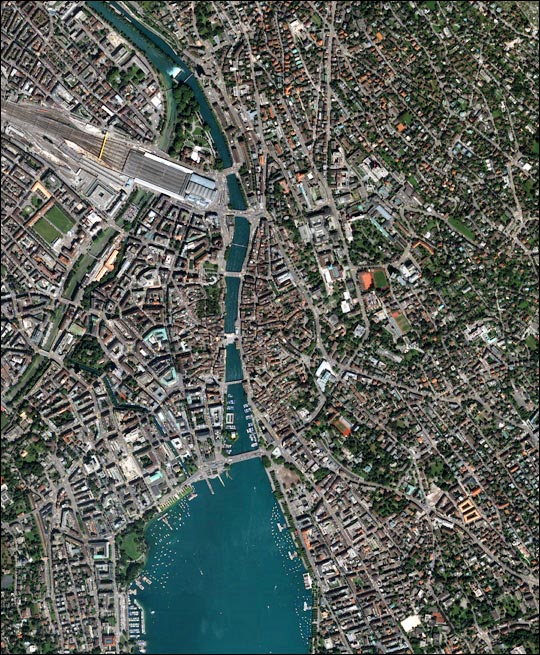 This satellite image displays the city of Zürich, located in the german-speaking part of Switzerland. It was acquired by the Quickbird satellite on August 16, 2002, and was pan-sharpened to an amazing ground resolution (level of detail) of 60 centimeters per pixel.

Zürich is the largest city in Switzerland, with a population of 364,558 in the city itself, and almost one million including the surrounding areas (based on 2002 figures). The city is the capital of the canton of Zürich (an administrative division similar to a state). The city is Switzerland’s main commercial center and home to the country’s largest airport. Known as the “little big city” it draws both business travelers and tourists.

The bottom of the image shows the northern tip of Lake Zürich, which is one of the main recreation areas of the city. The lake drains into the Limmat River. The Limmat divides the old town, and along its shores the city silhouette is dominated by the striking towers of three churches: the Grossmünster, St. Peter’s, which boasts Europe’s largest clock face, and the Fraumünster. The west (left) part of the old town is home to the famous shopping area at the Bahnhofstrasse, with its banks, insurance companies, and the Swiss stock exchange. The east (right) shore of the river leads to the Niederdorf with its narrow alleys, numerous cultural attractions, and perpetual night life. The main buildings of the Federal Institute of Technology (ETH) and the University of Zürich are located there as well.

The city is surrounded by woody hills and is only about 50 kilometers away from the alpine ridge and its skiing areas. It offers a good infrastructure for business customers, and its cultural diversity and extended public transportation system called S-Bahn makes the city attractive as a living place. The main S-Bahn station can be seen as a narrowing gray rectangle in the upper left area of the image. It is connected to an extended train and tram network, which takes over a reasonable percentage of the city’s traffic.