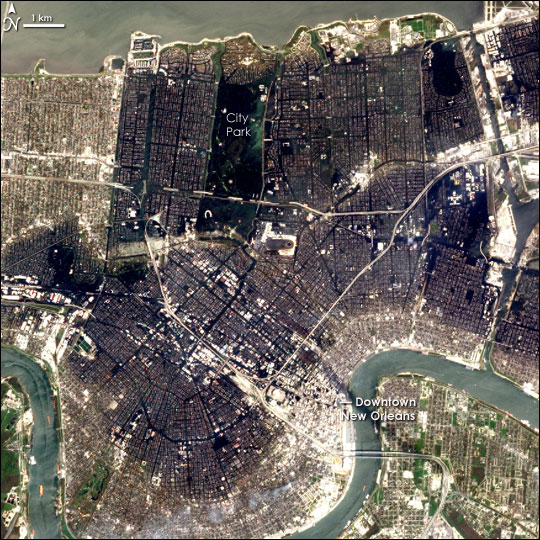 Although the breaches in the levees that allowed water to flow into New Orleans have been sealed, the city is still buried under a deep blue blanket of water. The water has been standing over the city for more than a week, after it began pouring in on August 29, 2005, when Hurricane Katrina battered the levees along the canals that run through the city from Lake Pontchartrain. The Advanced Land Imager on NASA’s EO-1 satellite acquired this detailed image of the flooded city on September 6, 2005. A strip of the city along the banks of the Mississippi River remains dry. In this dry area, which includes downtown New Orleans and the historic French Quarter, a white plume of smoke rises from a fire burning near the lower edge of the image.

Through the rest of the city, elevated sections of road and roof tops are the only things visible above the water. In the top center of the image, the grid of houses is interrupted where City Park is buried under a smooth blue-green pool of water. The bright white semi-circle seen on the south side of the park is the ring of seating in the open-air Tad Gormley Stadium. The source of the water, Lake Pontchartrain, can be seen along the top of the image. The water remains clouded with silt stirred up from the lake’s bottom when Hurricane Katrina passed overhead on August 29.

The large image provided in the link above shows a wider and more detailed view of the city at 10 meters per pixel.

Hurricane Katrina devastated parts of Louisiana, Mississippi, Alabama, and Florida with heavy rain and a powerful storm surge in August 2005.