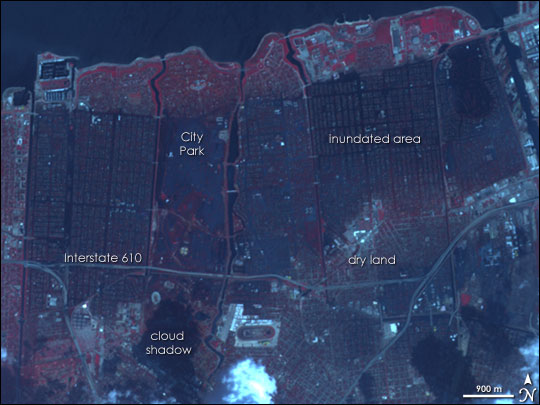 Two full weeks after Hurricane Katrina broke through the levees that protected the low-lying city, New Orleans was starting to dry out. While most of the area shown in this image is still under a sludge of dark flood water, many areas that had been flooded in previous days now appear to be dry. The Advanced Spaceborne Thermal Emission and Reflection Radiometer (ASTER) on NASA’s Terra satellite captured this image on September 13, 2005. In the false-color image, plants are dark red, water is deep blue, and the city is grey.

Just days before this image was taken, nearly the entire area shown here was underwater. Interstate 610 was visible only where the road was elevated. City Park was likewise buried with only a section of the white rim of Tad Gormley Stadium visible above the flood water. By September 13, both the highway and the stadium (the white circle immediately above the cloud shadow on the lower left side of the image) were dry.

The areas that are still flooded are the lowest points in the city. Like an uneven "U," the highest elevations in the city are along the Lake Pontchartrain, image top, and the Mississippi River, beyond the lower edge of the image. The land slopes sharply away from the lake, bottoming out about where the dark line of flood water remains. To the south of this low point, the elevation rises slowly to the natural levees along the Mississippi. With this topography, about 70 percent of the city is below sea level.

Hurricane Katrina devastated parts of Louisiana, Mississippi, Alabama, and Florida with heavy rain and a powerful storm surge in August 2005.